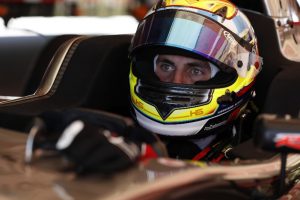 The changing conditions caught several drivers out, and a spot of rain was what caused Andres Gutierrez to slide off on lap 20 and hand the lead to RP Motorsport driver Scott.

Gutierrez, who had led for much of the race after displacing Scott and poleman Parker Thompson, finished in seventh. The Team Pelfrey driver’s off also a triggered full-course yellows and a safety car period which lasted for the remainder of the race.

Race one winner Parker Thompson was passed by Scott on the first lap and never quite got back in contention, despite setting some of the fastest laps of the race.

The other chief beneficiaries of Gutierrez?s off were Juncos Racing pair Rinus VeeKay and Carlos Cunha.

Cunha slid at the same corner as Gutierrez, but did not lose position. He was third, just ahead of his team-mate. VeeKay and Cunha were combative throughout the race, fighting off Rafael Martins and David Malukas. The battle for fourth to sixth places was the closest of the race; Martins and VeeKay fought repeatedly over fifth and Martins was cautioned for blocking at about half-distance.

Exclusive Autosport driver Thompson now leads the championship, with VeeKay just behind and Scott rising up to third in the standings.

All the teams took their chances with slicks at the start of the race, in the hope that the weather would dry and settle. After the safety car appeared, Oliver Askew and Kory Enders came into the pits for wets, hoping that they would get in a couple of fast laps before the race was over. This strategy turned out to be redundant as the green flag never appeared.

Nikita Listochkin and Lodovico Laurini tangled early in the race and Laurini received a drive-through penalty. Listochkin was near the back throughout but kept on attacking anyway, while Laurini rose up to ninth.

Antonio Seravalle of Exclusive Autosport and Charles Finelli of FatBoy did not make the start, for reasons that are unclear.