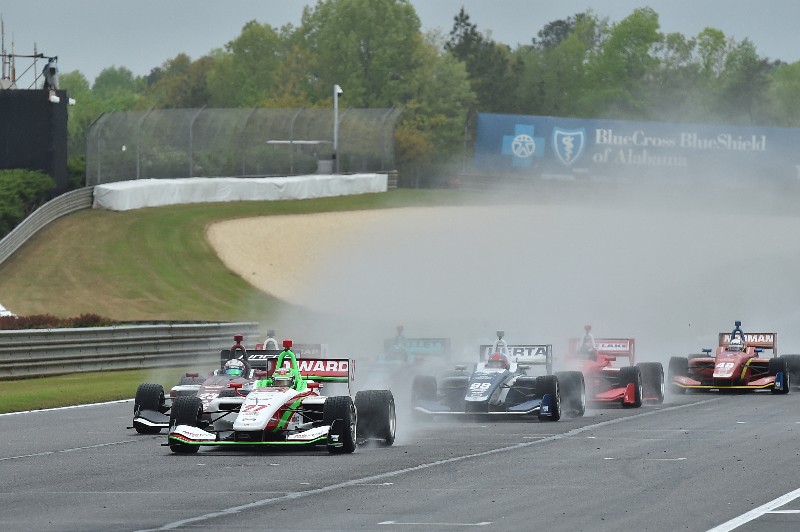 Patricio O?Ward won his second Indy Lights race of the weekend in dominant style at Barber Motorsports Park. The Andretti driver pulled away from pole and never looked back.

Eighteen-year-old rookie O?Ward had almost caught up with last-place driver Alfonso Celis with two laps to go, despite there only being eight cars in the race.

His victory was all the more impressive given his team?s choice of wet tyres; most of the track was drying throughout the race and O?Ward had to take a varying series of lines to achieve grip and keep his tyre temperatures down.

Victor Franzoni, also in his first Indy Lights season, was almost as impressive as O?Ward. He never really got within passing range of O?Ward but maintained a considerable lead over the drivers fighting for third place.

Santiago Urrutia initially made up one place to third, passing Colton Herta on the first lap, but the Uruguayan was not at home in the wet and had to settle for fifth. The race?s biggest battle was in the midfield and Urrutia was the centre of it.

Herta was the first to attack and overtook Urrutia in a classic and clean move at the tight Charlotte?s Web corner.

Belardi Auto Racing’s Aaron Telitz was the next to reel in the struggling Urrutia, at the same corner. This was the first race of the season where Telitz had made it further than the first lap. He remained in fourth, but dropped almost half a minute to Herta.

Urrutia then found himself holding off the trio of Dalton Kellett, Alfonso Celis and Ryan Norman. Celis took himself out of contention at about half distance, first sliding onto the grass then skidding off onto the gravel a couple of laps later. The young rookie had not had a good weekend, having spun in qualifying and not set a time. He was eighth.

Kellett and Norman could not pass each other or Urrutia, not for want of trying, and ended up in sixth and seventh place.

O’Ward now has a comfortable lead at the top of the standings. His tally of three wins in the first four races has only been bettered twice since 1977, by the late Greg Moore in 1995 and by Alex Lloyd in 2007.

Second place in the standings still belongs to Urrutia, but his lead to Herta in third has been cut significantly.