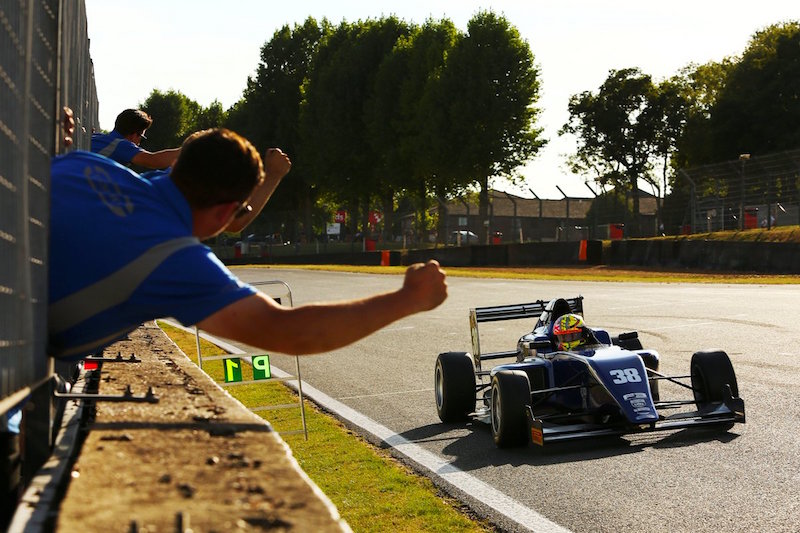 Jamie Caroline turned pole position into victory on his second outing in the BRDC British Formula 3 Championship at Brands Hatch, winning ahead of series leader Linus Lundqvist in the first Brands Hatch race.

Caroline led a closely-fought Carlin 1-2-3 in qualifying around the grand prix circuit, 0.062 seconds ahead of Nicolai Kjaergaard and 0.073s in front of Billy Monger, with Double R’s Lundqvist having to settle for fourth.

After a strong first lap, Caroline was nearly two seconds clear of Lundqvist and quickly increased that margin to three seconds, where it effectively remained until the end of the race.

Lundqvist had passed both Monger and?Kjaergaard on the run to the first corner, adding to his sizeable championship advantage over the latter.

Kjaergaard found pace as the race wore on, setting the fastest lap on the final tour to end up just half a second behind his rival.

Carlin locked out four of the top five places, with Sun Yue Yang finishing on the tail of Monger.

Kush Maini – whose brother, Formula 2 racer Arjun handed out the trophies on the podium – was a distant sixth, just ahead of fellow Indian?Krishnaraaj Mahadik.

From eighth on the grid, Tom Gamble lost a place to his Fortec Motorsports team-mate Manuel Maldonado at the start to end up ninth, with?Sasakorn Chaimongkol 10th.