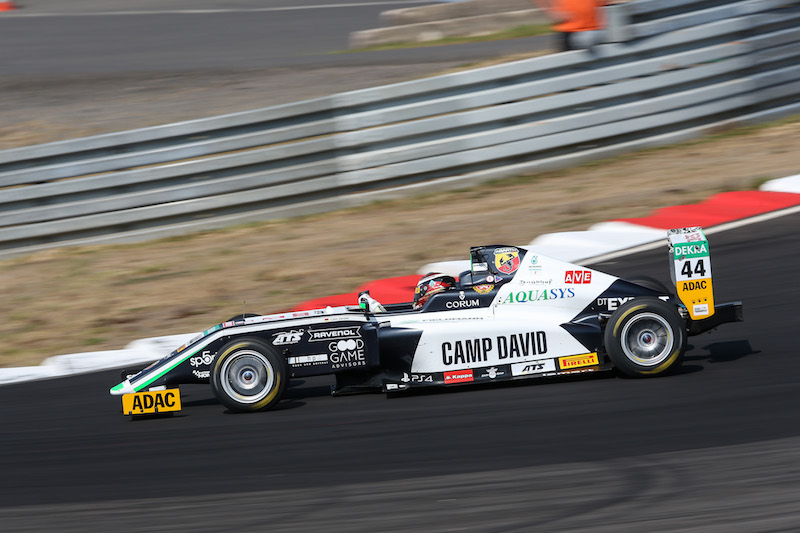 Lirim Zendeli secured the ADAC Formula 4 title with a fifth place finish in the final race of the weekend at the Nurburgring, where Niklas Krutten scored his maiden win.

Zendeli?s championship hopes were boosted when main title rival Liam Lawson was forced to come into the pits early in the race with a mechanical issue. Lawson was able to return to the track and take the chequered flag, but couldn?t climb back into the points paying positions.

That left Prema?s Enzo Fittipaldi as the only man standing between Zendeli and the title in the penultimate round of the championship.

A strong start from Fittipaldi put him fourth, before he inherited third after Leon Kohler came into the pits with a damaged front wing. He held onto the position to take a hat-trick of podium finishes at the Nurburgring, but it wasn?t enough to keep his title hopes alive.

Zendeli finished fifth despite late attacks from Frederik Vesti, putting the US Racing driver 79 points ahead of Fittipaldi in the championship standings with just 75 on offer in the final round of the season.

Away from the championship fight, Niklas Krutten claimed his first overall victory in the championship. The Mucke Motorsport driver snatched the race lead off the line and was untouchable throughout the race, finishing almost a second ahead of Gianluca Petecof in second.

The safety car was brought out early in the race after Joey Alders ran wide and became stuck in the gravel.

Zendeli’s team-mates Tom Beckhauser and Mick Wishofer came together on the opening lap, damaging both cars. It was the end of Wishofer?s race, but Beckhausser was able to return to the track after a visit to the pits. He finished a lap down in 13th.

Charles Weerts spent first half of the race battling to keep Vesti behind him. Vesti managed to find a way through to take fourth, but locked up after running close behind Fittipaldi and dropped down the order.

Jack Doohan was next to challenge the Van Amersfoort driver. He was looking for his best result of the championship when he attempted a move up the inside of Weerts, but Weerts shut the door and Doohan suffered a damaged front wing.

The Prema driver was shown the meatball flag and came into the pits for a new front wing. He was later handed a drive through penalty for crossing the white line and finished 12th?while Weerts took fourth.

Ido Cohen and Lucas Alecco Roy rounded out the top 10.