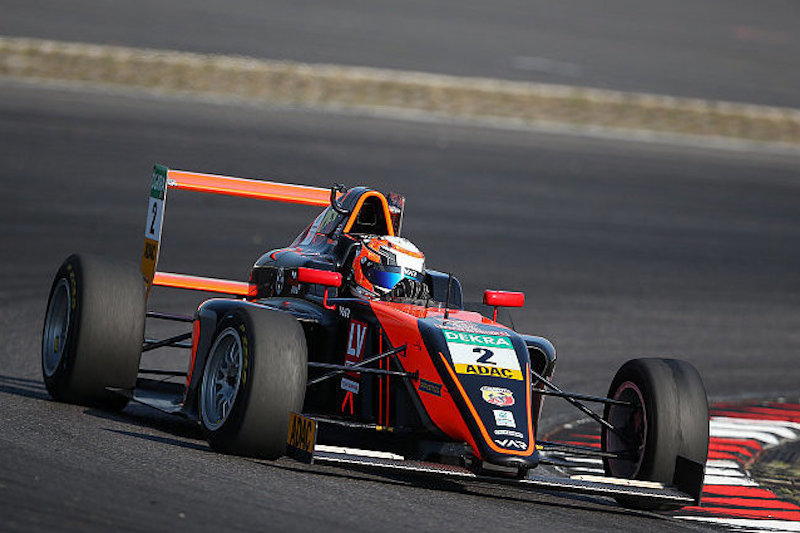 Fredrick Vesti denied Lirim Zendeli a second ADAC Formula 4 win at the Nurburgring, but Zendeli now has one hand on the title after rival Liam Lawson finished outside the points.

Zendeli led Vesti and Enzo Fittipaldi throughout the majority of the race, breaking away from the rest of the field early on.

Vesti waited until late to make a move up the inside of the championship leader to snatch the lead. Zendeli didn?t put up much of a fight, not wanting to risk missing out on a solid points finish, but did shut the door before Fittipaldi could follow the Van Amersfoort driver through.

The trio continued to run nose-to-tail to the chequered flag, with Vesti finishing 1.440s ahead of Zendeli, Fittipaldi a further 0.8s behind.

Lawson?s race came undone after contact with US Racing?s Mick Wishofer. The Van Amersfoort driver clipped the back of Wishofer?s car, damaging his front wing and sending Wishofer wide.

Both were able to continue, but came into the pits to repair their battle-worn cars. They returned to the race to circulate at the back of the field, finishing 15th?and 16th.

It means Zendeli is now 81 points ahead of Lawson and 84 ahead of Fittipaldi, and will win the championship in race three if he is 75 points clear.

Also in the wars early was Jack Doohan, who was sent wide on the opening lap. Damage to his suspension meant he was stranded at the side of the track and the safety car was called to clear the incident.

David Schumacher inherited fourth after Lawson?s incident and enjoyed a quiet race to take his second fourth position of the weekend, ahead of Charles Weerts, Gianluca Petecof, and Niklas Krutten. Weerts, Petecof, and Krutten were sent to the stewards after the race after being investigated for overtaking under the safety car.

Leon Kohler finished eighth, followed by Oliver Caldwell, who was recovering after an opening lap spin.