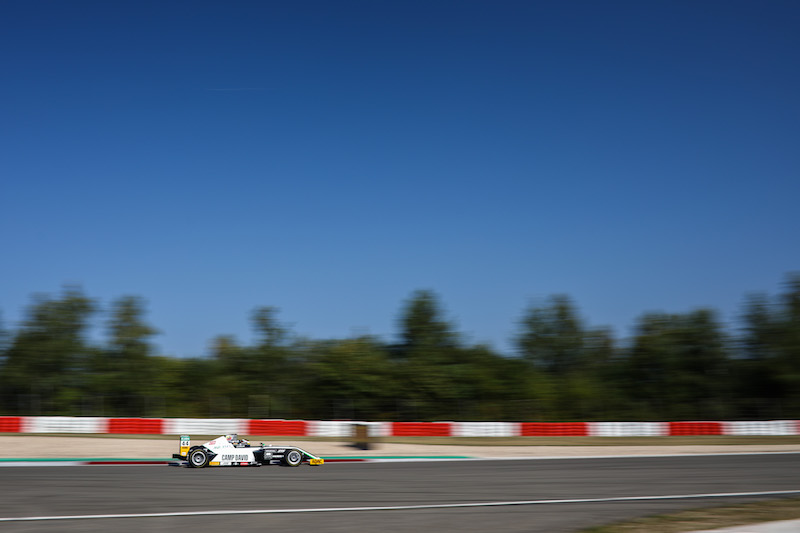 Lirim Zendeli took victory in the opening ADAC Formula 4 race at the Nurburgring to increase his chances of securing the title during the penultimate round of the season.

Zendeli spent the entire race managing his gap to Enzo Fittipaldi before finishing half a second ahead of the Prema driver.

A slow start by Fittipaldi left him battling team-mate Olli Caldwell off the line. The pair ran side by side and briefly touched at the first corner, both running wide. The battle allowed David Schumacher to take third on the opening lap and Caldwell dropped down the order.

Fredric Vesti soon caught Schumacher, passing the US Racing driver for third early in the race. He spent the remainder of the race on his own, closing the gap to the leaders in the closing stages but never getting close enough to threaten Fittipaldi.

Gianluca Petecof began to close in on Schumacher towards the end of the race, too, but the Prema driver?s main concern was keeping those behind him at bay.

Petecof spent most of the race with Liam Lawson and Charles Weerts on his tail. Lawson, second in the championship, pushed hard, but Petecof put up a strong defence to deny Lawson a top five finish.

It means that Zendeli now enjoys a 63-point cushion over Lawson, and 81 over Fittipaldi, and will seal the title if he is 75 points clear at the top of the standings at the end of race three. Zendeli starts from pole again in race two.

After falling backwards, Caldwell collided with Joey Alders on the opening lap. Caldwell was left with a damaged front wing after the coming together, though both drivers were able to limp back to the pits, along with fellow Prema driver Jack Doohan. Alders was sent back out after quick repairs by the Van Amersfoort squad, but returned to the pits after 12 laps.