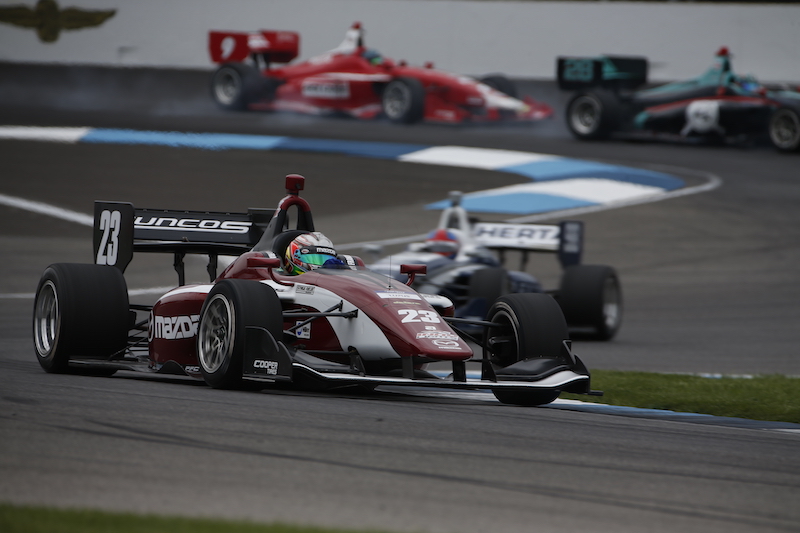 Mazda will cease its support as title sponsor of the ‘Road to Indy’ IndyCar feeder series from 2019 onwards as a result of restructuring of its motorsport involvement.

Since 2009, Mazda has acted as the title sponsor to the Andersen Promotions-ran ‘Road to Indy’ ladder, which encompasses Indy Lights, Pro Mazda, USF2000 and the end-of-year MRTI Shootout. There are also numerous championships with a link to MRTI, with the champions of NACAM Formula 4 and New Zealand Formula Ford receiving tickets to the Shootout.

The existence of the support categories is not believed to be under threat, despite Indy Lights, the primary feeder series for IndyCar, averaging grid sizes of less than eight cars.

?On behalf of Mazda, I?d like to thank Andersen Promotions and everyone involved with the Road to Indy for a wonderful nine years, but the time has come for Mazda to focus our resources into other areas of our motorsports footprint,” said?John Doonan, Mazda’s motorsports director.

“We have truly enjoyed our role in developing young racers into Indy 500 hopefuls. The 2018 USF2000, Pro Mazda and Indy Lights champions will receive Mazda Advancement Scholarships for the 2019 season and the annual $200,000 Mazda Road to Indy Global shootout will also be held in December of this season.

“Motorsports is at the core of Mazda?s DNA and the company remains committed to its variety of motorsports programs in the coming years including our grassroots club racing initiatives, the Global MX-5 Cup, the Mazda Road to 24, and Mazda Team Joest.?

Mazda’s most significant motorsport presence is its American sportscar programme in the Daytona Prototype class of IMSA. There has yet to be a win in its two-and-a-half years of competition, despite the involvement this year of legendary Le Mans team Joest Racing.

?We would like to thank Mazda for nine tremendous years in supporting and headlining the Mazda Road to Indy Presented by Cooper Tires,” added Dan Andersen, the owner and CEO of MRTI promoter Andersen Promotions.

?They have been a great partner and their scholarships have helped so many drivers achieve their dream of progressing to IndyCar. Mazda has been a key player in establishing and helping to grow our driver development system into the unparalleled program it is today.

?As their marketing objectives pursue new horizons, we at Andersen Promotions are committed to maintaining the outstanding ladder structure we have in place for 2019 and beyond. We are currently in discussions with several potential companies as we actively pursue a new partner.?

No comment has been made on the Mazda engine supply that all three of the support series depend on. Indy Lights previously used Nissan engines up to 2014, while USF2000 grew out of the Formula Ford 2000 championship.