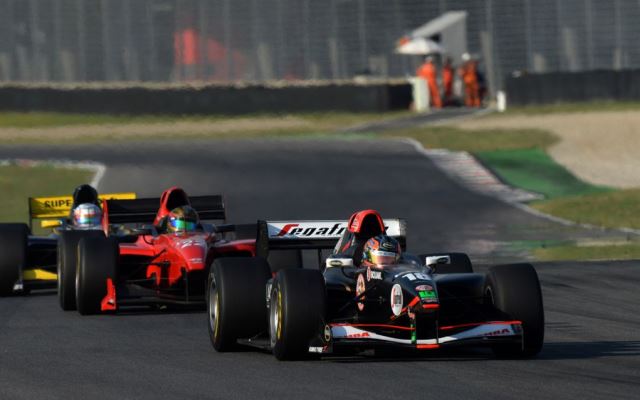 Sergio Campana moved into the lead of the Auto GP standings after inheriting victory in the first race at Mugello once on-the-road victor Meindert van Buuren was penalised.

Erstwhile championship leader Kimiya Sato was forced out of action on the first lap after he was hit by debutant Christian Klien and then collected by Michele La Rosa.

The safety car came out, with Vittorio Ghirelli leading Kevin Giovesi, who effectively inherited the pole after Narain Karthikeyan started from the pits after engine troubles.

Bizarrely, the Italian duo both went off at turn one at the restart as they fought over first place. They managed to rejoin, but van Buuren was promoted to the lead after qualifying seventh.

Campana took up second place until he made his pitstop on lap eight, which allowed the recovering Giovesi to close right up on van Buuren. They stopped together on lap 13, but a slower stop for Giovesi meant he rejoined back in third behind Campana.

Van Buuren held on under pressure from the two drivers behind to claim his maiden Auto GP win, only to have it taken away thanks to a 25 penalty for crossing the white line upon exiting the pit lane. That relegated him to tenth and last of the finishers.

Karthikeyan recovered well to finish on Giovesi’s tail to take what would become third place. Andrea Roda was fourth ahead of Tamas Pal Kiss, while Ghirelli finished sixth with engine problems late on. Yoshitaka Kuroda was seventh, while Klien took eighth and the reverse grid pole.

Felix Rosenqvist to keep his results in races one and two