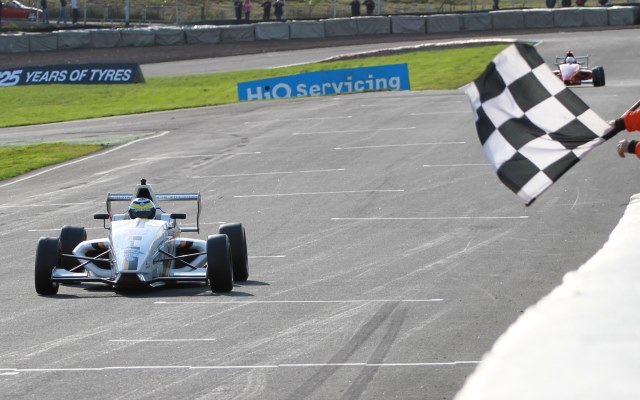 Dan Cammish didn’t let his Knockhill rival Nico Maranzana get close to him in the third race of the weekend in Scotland as he recorded victory number 21.

Back on pole after Argentinian rookie Maranzana had denied him a P1 starting position for race two, Cammish quickly established a gap up front. By lap eight he was three seconds ahead and finished up 2.4s clear after 24 laps. Cammish will wrap up the title at Rockingham as long as he finishes the weekend with a lead of 187 points – he currently heads Maranzana by 199.

Harrison Scott held third early on but was passed on lap four by Jayde Kruger. Sam Brabham then set about finding a way past Scott but spun on lap 15, losing spots to Juan Rosso and Camren Kaminsky.

Three laps later Rosso did get by Scott, while Brabham re-passed Kaminsky. Brabham got close to passing Scott right at the end, but missed out by just 0.01s.