Cammish ahead of Kruger and Scott in second Snetterton race 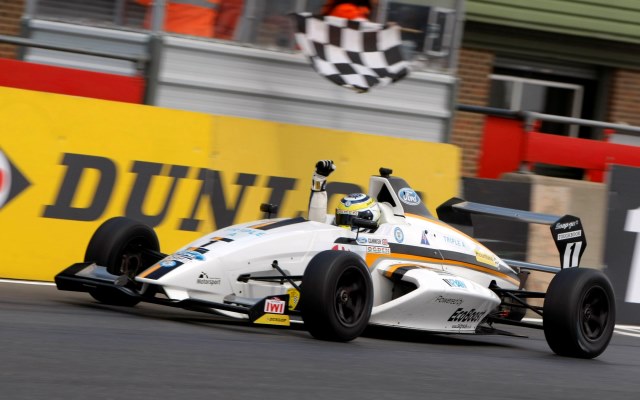 Dan Cammish added his seventeenth win from as many Formula Ford GB races this season with a straightforward victory in race two at Snetterton ahead of Jayde Kruger and Harrison Scott.

Leading away from pole position, Cammish built up a gap of two seconds over Kruger on the first lap. He then stretched his advantage to more than eight seconds before dropping off to take a 5.7s win.

Kruger built up a gap of over five seconds to Scott within four laps, with Scott having been held up by Sam Brabham until the JTR driver retired on lap four. Scott was then able to quickly reel Kruger in, finishing only half a second behind.

Just as yesterday, Kruger’s Jamun team-mates Nico Maranzana and Juan Rosso were close at the finish, Maranzana this time ahead in fourth. Camren Kaminsky finished sixth with front wing damage, ahead of James Abbott.

On his first weekend, Zaid Ashkanani passed Andy Richardson for eighth on the last lap, while Connor Mills finished tenth in his first Formula Ford race after engine troubles kept him out of race one.

Steijn Schothorst doubles up at Assen