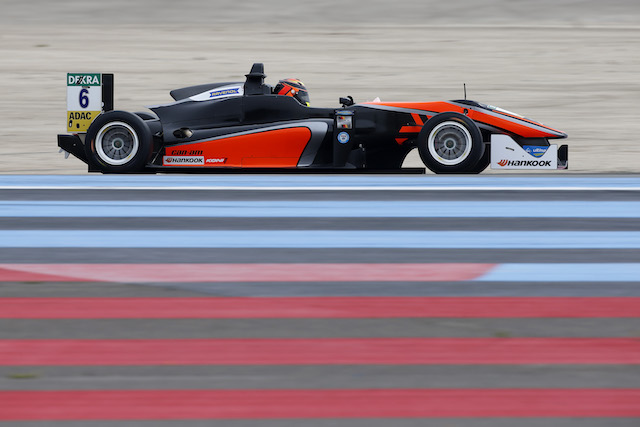 Starting sixth on the grid, the Brit did a good job at keeping his Van Amersfoort car?on the circuit while others crashed out to take his first win in the series.

With a small shower before the race, the idea of wet tyres was thrown around but ultimately teams decided on slicks. Pole sitter Max Gunther had a terrible start causing a concertina effect?behind him. This led to a large crash at turn one involving Gunther, Harrison Newey, Ben Barnicoat, race one winner Lance Stroll, Joel Eriksson?and Niko Kari.

Though Eriksson and Kari were able to get away despite the former ending up on two wheels at one point, the others were all eliminated from the race.

With Gunther out in the first turn, it allowed Nick Cassidy to take the lead behind the safety?car while track officials cleaned up the wreckage. Though the Kiwi got away cleanly after the restart, he had an off-track moment which allowed Illot to get ahead as light rain once again appeared at the circuit.

Mikkel Jensen?in the only Mucke car?had a far better race compared to race one but finished one place down from where he started to take fourth position.

An incident late into the race had?Ralf Aron‘s?left rear wheel leave?his car completely, spinning him into the wall and bringing out a second safety car.

The rest of the field had been bunched up from the start of the race all the way until the flag producing some great racing as the track got wetter and more greasy. The final safety car left the track with one lap left, giving?the drivers one more lap to fight it out.

Anthoine Hubert?had held onto fifth place for much of the race but got caught out on the wet curbs on the outside of Turn 9 on the final lap. He re-entered the track just?as Sergio Sette?Camara, Alessio Lorandi, Ryan Tveter, Eriksson and Raoul Hyman were?fighting for the last points paying position into?the penultimate corner.

Across the line with the cars four-wide, Camara took fifth, Lorandi sixth, Tveter seventh only 0.004 ahead of Hubert. Eriksson took ninth?despite his incident earlier, with Hyman rounding out the top 10, all within just over one second of each other over the line.