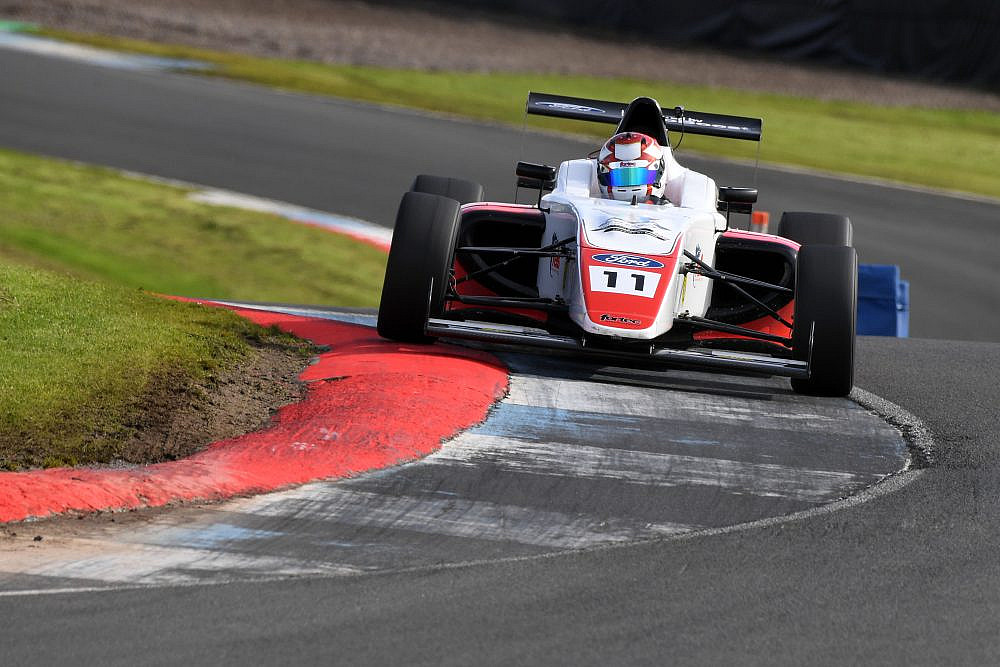 Luke Browning dominated the opening British Formula 4 race at Knockhill to take his fourth consecutive win of the season.

Browning got a good get away from pole and was unchallenged throughout the race. He was able to pull a gap of almost three seconds to Alex Connor, setting multiple fastest laps in the process and came home 2.725s ahead of the Arden driver.

There was drama further back as James Hedley and Roberto Faria came together in a battle for fifth. Hedley had been keeping the pressure on Carlin’s Zak O’Sullivan ahead and an attempted move allowed Faria to close in on him.

The Fortec Motorsports driver attempted a late lunge on Hedley but there wasn’t enough room to make it stick and the pair came together. JHR Developments’ Hedley was sent into the barriers while Faria dropped back down to ninth.

The incident was cleared under a local yellow flag and racing was allowed to resume.

Faria quickly got back up to pace, passing Carlin’s Christian Mansell with a lunge up the inside of the hairpin and rapidly closing the gap to Rafael Villagomez. The two Fortec drivers ran side by side but it was Faria who had the advantage and snatched seventh.

The battling Roman Bilinski and Abbi Pulling were too far ahead of Faria in the closing stages of the race for him to progress any further, with Pulling securing reversed grid pole for race two in sixth.

At the front of the field, Argenti Motorsport’s Casper Stevenson took third ahead of O’Sullivan, who set a new lap record with a 49.443s lap.