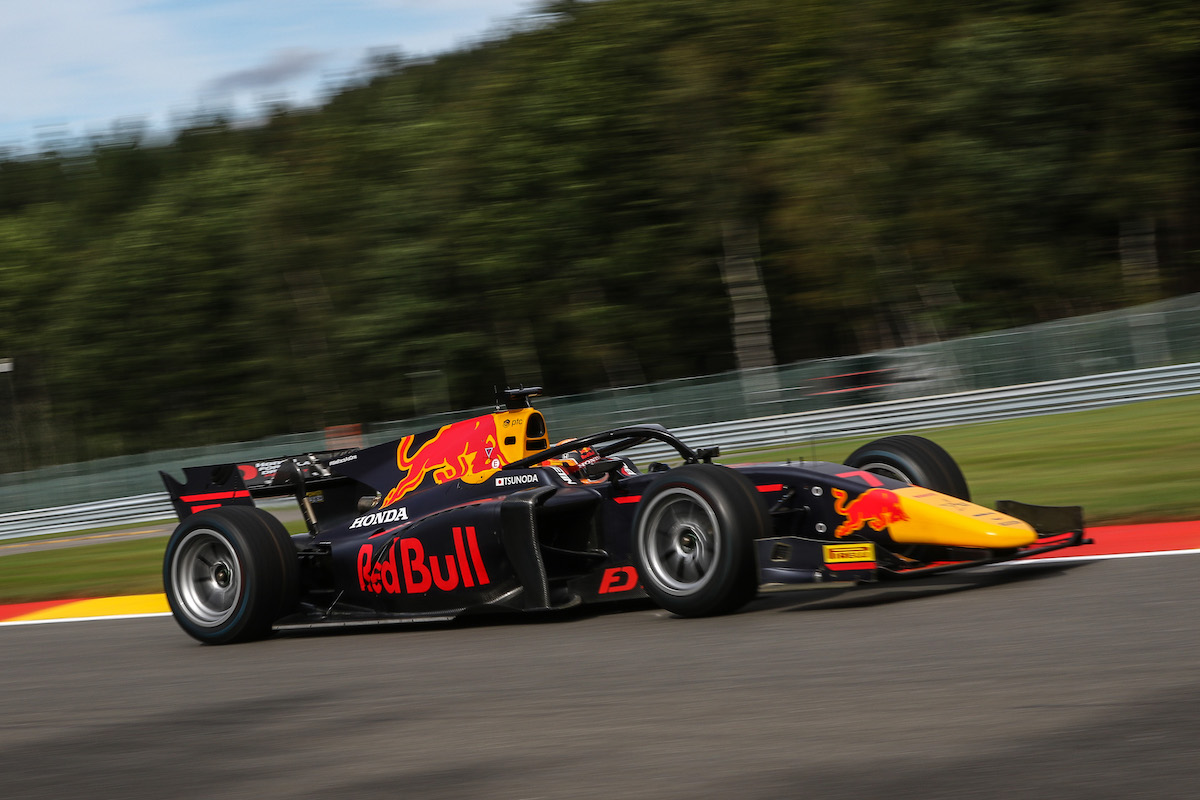 Hitech GP driver Mazepin fended off Tsunoda in the closing stages to take the chequered flag, but was then given a five-second penalty during the cool-down lap for forcing his rival off track in his defence.

In the race that was preceded by a minute’s silence in memory of Anthoine Hubert, Tsunoda started on pole and rebuffed Mazepin at the start. Mazepin then slipped into the clutches of MP Motorsport’s Nobuharu Matsushita.

Tsunoda immediately opened up a sizeable gap, while Matsushita’s tyres dropped off almost immediately. He was passed by Mazepin, Prema’s Mick Schumacher and Charouz driver Louis Deletraz to name a few.

Mazepin was able to close up slightly on Tsunoda at the restart, and jumped ahead of his rival after pitting for medium tyres one lap beforehand.

Tsunoda suffered a slow pitstop, but Mazepin’s was not without trouble either. He got a lot of wheelspin on the exit, and opted to straight-line through the Trident pit box, forcing several mechanics to take evasive action. That was quickly placed under investigation for after the race.

Mazepin held track position, but Tsunoda opted to try and make the move on-track. Twice, Mazepin made Tsunoda take the outside line at Les Combes, and on both occasions, he had to take to the run-off.

At the end, Mazepin held off an irritated Tsunoda by half a second at the end, before the stewards switched their positions by handing Mazepin a penalty. Mazepin copped another investigation post-race when he clattered into the second-placed marker in parc ferme, and it narrowly avoided hitting the celebrating Tsunoda.

Schumacher had a relatively quiet run to third place, with Deletraz in fourth ahead of Shwartzman, who took crucial points for the championship in fifth.

Trident’s Roy Nissany stole eighth place and reversed-grid pole for Sunday’s sprint race with a bold pass on Luca Ghiotto towards the end.

Championship leader Callum Ilott had a difficult race, coming home in 10th, just ahead of debutant Juri Vips who had a strong drive from the back row of the grid.

In addition to the pre-race tribute, Hubert’s memory was marked one year on by applause from those in the pits and Formula 1 garages on lap 19 of the race.