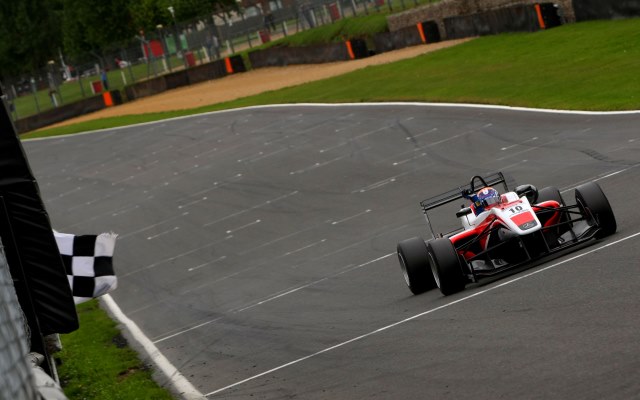 Santino Ferrucci claimed his first win in European single-seaters in race one of the British F3 round at Brands Hatch.

The 16-year-old American led from start to finish on his series debut with Fortec Motorsports.

Starting from pole position courtesy of second-best times in qualifying, Ferrucci quickly opened up a comfortable lead over team-mate Martin Cao. He was almost six seconds clear at one point, before backing off to take a 3.2 second win.

Cao enjoyed a quiet run to second, while Matt Rao was set to make it a podium lockout for Fortec after passing Peter Li‘s Carlin car for third. That result would have been enough for Rao to keep hold of the championship lead with a one point margin over Cao, but he threw the position away with a spin with less than three laps left.

That allowed F3 debutant Dan Wells to make the podium for Double R, just managing to hold off the attempts of Rao to recover the place. Rao will start race two from the reverse grid pole position.

Li was shuffled back to seventh and last, with Max Marshall managing to keep Double R team-mate Camren Kaminsky at bay to take fifth.