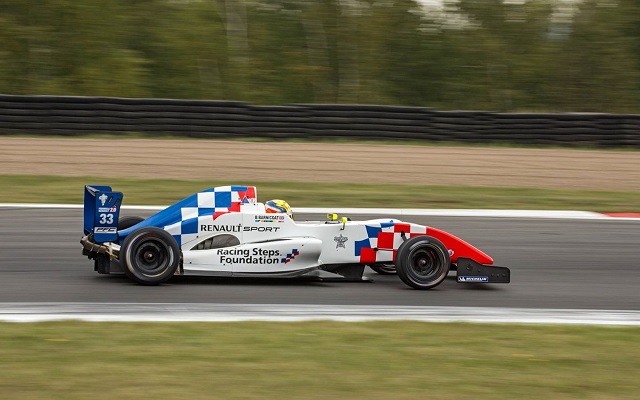 Racing Steps Foundation-backed Ben Barnicoat celebrated his second victory in Formula Renault 2.0 NEC in the first race of the penultimate round of the season at Most.

Although it was Seb Morris who topped the first qualifying session and was set to start the race from pole, a five-place grid penalty for the Welshman allowed Alex Albon and Barnicoat to occupy the front row.

At the start, Barnicoat took the lead from the Thai driver and would maintain it until the checkered flag with Albon finishing just a second behind him.

Morris kept his championship hopes alive as he fought his way back to the podium, taking advantage car failures for Gustav Malja and Julio Moreno, who both ran in the top five during the opening stint of the race.

Title contender Steijn Schothorst was also forced to retire from seventh after mechanical issues with the car, allowing Barnicoat and Louis Deletraz, who took fourth, to pull away in the standings.

Although the penultimate round of the 2014 Formula Renault 2.0 NEC season had been planned to have three races, the second one was cancelled due to heavy rain. As such, race two based on results from the second qualifying will be run later on Sunday instead of the originally planned reverse-grid race three.

Barnicoat is currently leading the championship with 210 points. Deletraz is nine points adrift, while Schothorst is now 27 points off the lead.