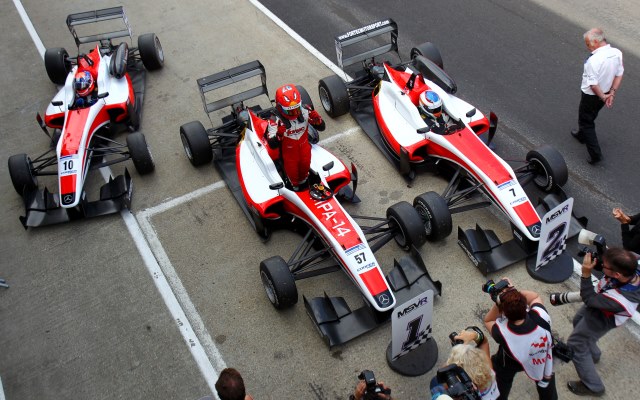 Martin Cao increased his British F3 championship lead with victory in the second race of weekend at Brands Hatch after a superb getaway.

A launch befitting of the Chinese driver’s ‘Angry Birds’-style helmet design catapulted him into the lead from third on the grid, past his pole-sitting team-mate and title rival Matt Rao.

Cao then led for the entire 23 laps, finishing 3.6 seconds ahead of Rao to secure his third win of the campaign and stretch his standings advantage from five to nine points. He starts race three from pole position after setting the best time in qualifying on Saturday.

“My start was mega!,” said Cao. “I used the handbrake and the pre-load and it all worked perfectly.

“My plan had been to try to get the lead in the first couple of laps, but amazingly I was in P1 by the first corner. For the last laps of the race I was concerned as there was a warning light showing telling me that the coolant level was too low. I wasn?t sure if it was a false warning so I just kept it steady and brought the car home safe.”

Race one winner Santino Ferrucci threatened Rao early on but would settle for third, completing a Fortec podium lockout on his guest appearance with the squad.

Dan Wells took fourth as the best of the Double R cars. Max Marshall had been fifth until an off at Druids, allowing Camren Kaminsky and Peter Li to complete the top six.