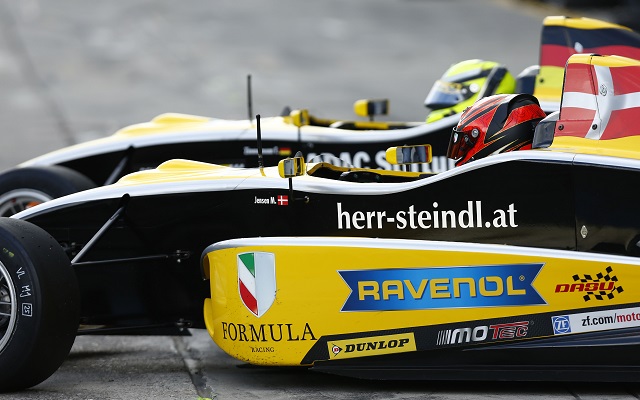 The Dane crucially overtook his squadmate Tim Zimmermann in traffic and went on to win the race by six seconds.

JBR’s Polish rookie Igor Walilko started the race from reverse-grid pole position with Jensen joining him on front row after going off from the lead in race two.

Walilko managed a solid start and held the lead into turn one, chopping in front of Jensen. The Dane was also caught by Fabian Schiller and exited turn one in third place.

Schiller and Jensen jockeyed for position during the opening lap and eventually went side-by-side into the MGK chicane. The championship leader edged slightly ahead, which left Schiller no space coming out of the corner. Contact was made and the German briefly went airborne, before skidding off the track and retiring from the race.

The safety car was brought out for the incident, albeit Jensen escaped without any damage. It took a few minutes to clear the track, but, eventually, the race got back under green, with Walilko the leader and Zimmermann second, having cleared his teammate during the earlier incident.

Just then, the stewards announced that the race leader would have to serve a drive through for being out of position on the grid. Walilko didn’t come in immediately, opting to stay out for a few laps – and, coming into turn one, Zimmermann ended up boxed in behind him, which allowed Jensen to dive down the inside and take second.

The Dane didn’t even wait for Walilko to serve his penalty, overtaking him with ease the next time by. From that point on, it was smooth sailing for Jensen, who converted his advantage into his second triumph of the weekend.

After Walilko pitted, Zimmermann inherited second, albeit coming under pressure from Mucke’s Maximilian Gunther. The two ran nose-to-tail for the much of the remainder of the race, with Zimmermann holding on for second and Gunther settling for third.

Gunther’s teammate Marvin Dienst finished close behind in fourth, whilst, behind him, there was a four-way fight for fifth between four Lotus cars.

With Ralph Boschung, Dennis Marschall, Luis-Enrique Breuer and Joel Eriksson running close by, contact was made on the last lap between the former duo, which sent Marschall spinning out of the points. Despite the collision, Boschung went on to take fifth, ahead of Breuer and Eriksson.

Kim-Luis Schramm, Nico Menzel and David Kolkmann rounded out the top ten, while Marschall, Giorgio Maggi and Walilko made up the rest of the finishing order.