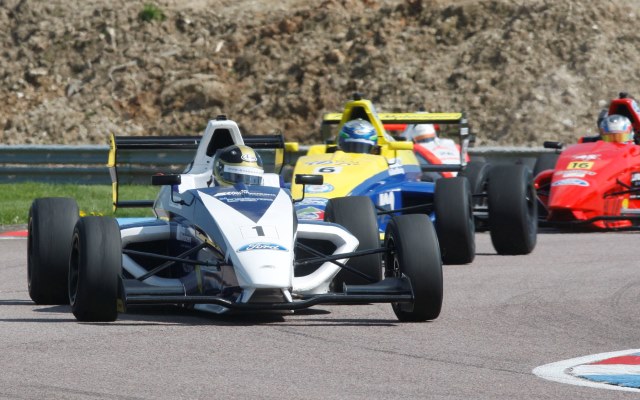 Sam Brabham claimed his maiden car racing win in the opening Formula Ford GB race of the Thruxton weekend, which was interrupted by a lengthy safety car period.

Brabham retained the lead from pole position while Harrison Scott made strong early progress to move from fourth to second past Max Marshall and then Jayde Kruger.

Chris Mealin had made a great start from eighth to also clear Marshall, but tangled with Kruger at the end of lap three, sending him off into the barriers at high speed. He escaped seemingly okay, but was taken to the medical centre as a precaution. Kruger was forced to pit and retire.

The resultant safety car period lasted six laps, but Brabham saw off the advances of Scott at the restart to win by half a second.

Ashley Sutton enjoyed a dream return to action with new team Jamun. He went into qualifying having never driven the track after missing the official test there last month (where sidelined Jamun driver Jack Barlow was injured in a high-speed crash), but secured his maiden podium finish having put Scott under pressure late on.

Marshall finished fourth ahead of the Radical duo of Juan Rosso and James Abbott and the Meridian pairing of Connor Mills and Bobby Thompson. Ricky Collard finished ninth after a visit to the pits, with Nigerian Ovie Iroro recovering from a stall to beat Greg Holloway to the final point.