written by Valentin Khorounzhiy 3 May 2014 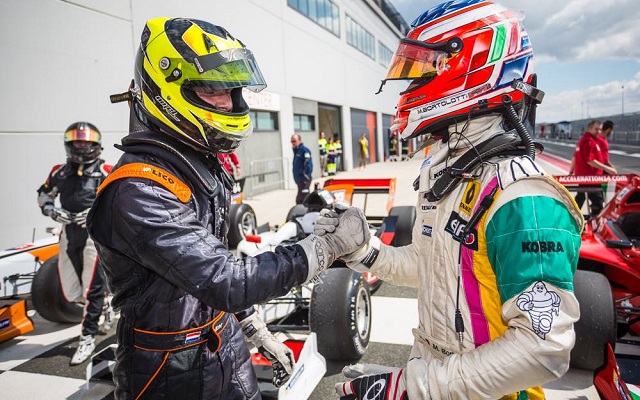 Melker’s win was under doubt only throughout the opening lap, as he briefly allowed a charging Mirko Bortolotti into the lead off the start. However, the Italian then made a mistake and Melker was able to take first place back midway through the lap.

From that point on, the Dutchman kept his Italian opponent at a safe distance, comfortably setting the pace out front.

The two both made their sole mandatory stop on lap ten and Melker would emerge safely ahead of Bortolotti.

The Italian then came under pressure from third-placed Richard Gonda, who he’d have to defend from for the remainder of the race.

As such, it was Melker who took his first victory in FA1, leading by more than 11 seconds at the line. Bortolotti held on to second, while Gonda picked up his first podium in the series in third.

Dennis Lind managed to narrowly keep Rodolfo Gonzalez at bay to take fourth, with the Venezuelan rounding out the top five. Sergio Campana recovered from a horrid start to the race to come home in sixth, while Sebastian Balthasar took seventh. Finally, Michael Dorrbecker led Armando Parente in eighth, rounding out the finishers.