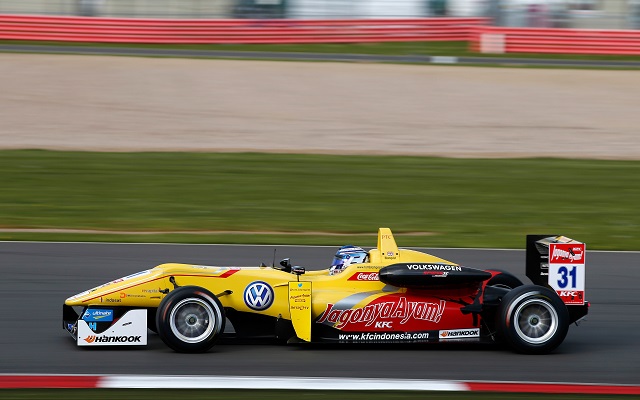 British racer Tom Blomqvist delighted the local fans at Silverstone by taking his first race victory in European F3 from pole position in the opening race of the 2014 season.

The Jagonya Ayam with Carlin racer controlled the race from the very start and was untroubled at the front throughout despite a safety car disruption.

Fellow front row starter Esteban Ocon held on to second at the start, while Jordan King made his way up to third from sixth on the grid throughout the opening lap. Further down the field, there were some incidents, as Max Verstappen picked up front wing damage and had to pull into the pits, while rookies Alex Toril and Michele Beretta came together and were left stranded in the gravel.

The race was put under safety car due to the latter incident and, when the track went back to green flag, Blomqvist got an excellent restart to keep the lead. Ocon, meanwhile, came under pressure from King, who was briefly ahead of the Frenchman on the main straight, but wound up settling for third into turn one.

From that point on, race leader Blomqvist kept a good deal of distance between him and his chasers and would comfortably cross the line in first. Ocon had to fend off further attacks from King, but kept second, with the Carlin man rounding out the podium.

Ferrari junior Antonio Fuoco enjoyed a solid debut in the series in fourth, while Lucas Auer managed to overtake Nicholas Latifi after the restart to claim an eventual fifth.

The Canadian struggled for pace but ultimately kept a number of drivers at bay to take sixth. Felix Serralles overhauled Ed Jones for seventh, while Felix Rosenqvist saw off Felipe Guimaraes to take ninth, despite having made contact with Spike Goddard earlier on in the race.