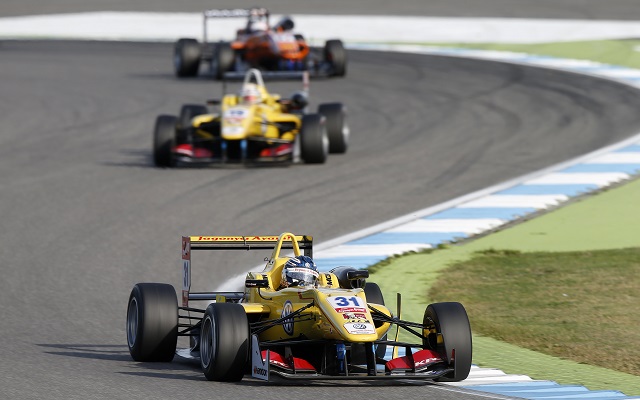 Carlin’s Tom Blomqvist netted his sixth victory of the season with a controlled drive from pole in the second race of the final FIA F3 European Championship round at Hockenheim.

Despite a mid-race safety car period and an early red flag conclusion, the Brit never seemed under much danger of losing the lead of the race for the duration of the event.

A great start allowed Blomqvist to pull clear of fellow Carlin driver Antonio Giovinazzi, who slipped behind Lucas Auer into turn one in the fight for second.

There was trouble further down the order in the top ten, as Sean Gelael tapped Antonio Fuoco into a spin in the hairpin. Fuoco wouldn’t be the only high-profile name involved in an incident early on, with Esteban Ocon pulling off a forceful move on Jordan King for fourth, which resulted in King picking up front wing damage over the kerbs and subsequently having to take to the pits.

With Blomqvist pulling away at a rapid rate out front, the race was put under safety car conditions suspended due to debris on track – a result of contact between Michele Beretta and Spike Goddard. The yellow flags didn’t last for long, though, and, at the restart, the Brit began immediately re-establishing a sizeable lead over his rivals.

He would be given even more breathing room in the final laps of the race when second-placed Auer missed his braking point into the hairpin, which also allowed Giovinazzi back through.

On the final lap, the race was red-flagged due to contact between a recovering Fuoco and Jake Dennis in the fight for 12th, with both the respective drivers’ cars coming to a halt in the runoff.

Blomqvist, as such, claimed victory as the race was called, with Giovinazzi completing a Carlin 1-2 and Auer taking third.

Ocon was fourth ahead of Max Verstappen, who fought his way up from ninth on the grid. Felix Rosenqvist took sixth, with Mucke squadmate Roy Nissany edging out Tatiana Calderon for seventh.

The win means Blomqvist reclaims the runner-up spot in the standings from Verstappen by two points, with the Brit also set to start the last race of the season from pole.