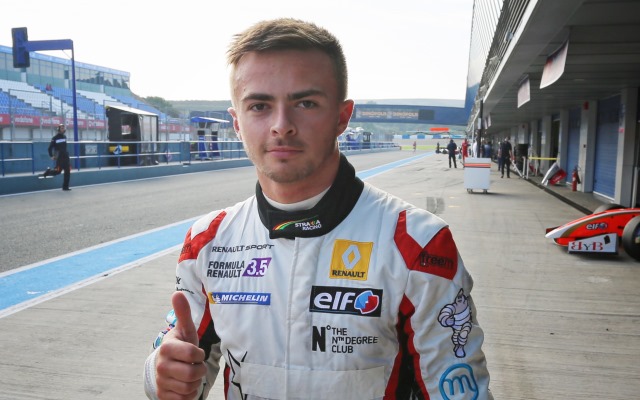 Will Stevens converted pole into victory in the first Formula Renault 3.5 race at Jerez as Carlos Sainz secured the title when Roberto Merhi crashed out at the first corner.

Merhi needed to win the race to keep his title hopes alive, but although he started back in tenth on the grid, he did make a good start. However, his chances ended under braking for turn one when a slow-starting Will Buller moved over and tangled with Marlon Stockinger, turning Buller into Merhi and taking both cars off into the gravel. With Merhi out, Sainz’s title was guaranteed.

Stevens made a good start and opened up a 1.5 second lead over second-placed Oliver Rowland. Rowland briefly cut that gap in the middle of the race to half a second, but Stevens quickly responded.

Rowland would close right up again in the closing minutes, even launching a bid for the win on the outside of the very last corner, but finished up 0.078 seconds short as Stevens claimed his first victory since Monza.

Rowland’s Fortec team-mate Sergey Sirotkin ran third throughout and was able to close right up onto the lead battle before the end and finished within half a second of the win.

Matthieu Vaxiviere had a quiet run to fourth, while Beitske Visser scored a magnificent fifth place. The Dutch driver steered her way from 12th to fifth on the first lap and the former Red Bull Junior spent the rest of the race defending the place well from Pierre Gasly.

Update: Sainz was given a 25-second penalty for causing his contact with Tunjo, dropping him to 15th in the results.