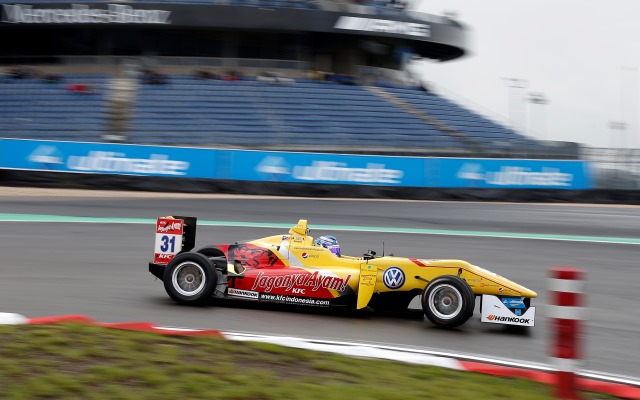 Tom Blomqvist and Esteban Ocon topped the times in the two free practice sessions for the ninth round of the FIA F3 European Championship at the Nurburgring.

Blomqvist set a time of 1m23.217 to top the opening session, 12 seconds faster than Ocon was able to go in the wetter second phase.

Championship leader Ocon was second quickest to Blomqvist in the first half of running, half a tenth adrift. The Frenchman leads the standings by 94 points, and can wrap up the title this weekend if he can build up a margin of more than 150.

Jake Dennis was third fastest ahead of Max Verstappen, who is competing in Red Bull colours for the first time.?Jordan King was fifth ahead of Antonio Fuoco, Gustavo Menezes and Ed Jones, while Dennis van de Laar and Felix Rosenqvist completed the top ten.

Verstappen finished up second to Ocon in the worse conditions of session two, just 0.019s slower than his rival.

Fuoco was again sixth ahead of Jones, the final Mucke car of Roy Nissany, Felix Serralles and Jules Szymkowiak.

Spielberg winner Antonio Giovinazzi?suffered electrical issues throughout. Dennis crashed early in his running in the second session, as did newcomer Andy Chang, who has replaced Hector Hurst at West-Tec.

Fortec are not present, with John Bryant-Meisner having brought his campaign to a close after team-mate Mitch Gilbert had earlier departed for GP3.