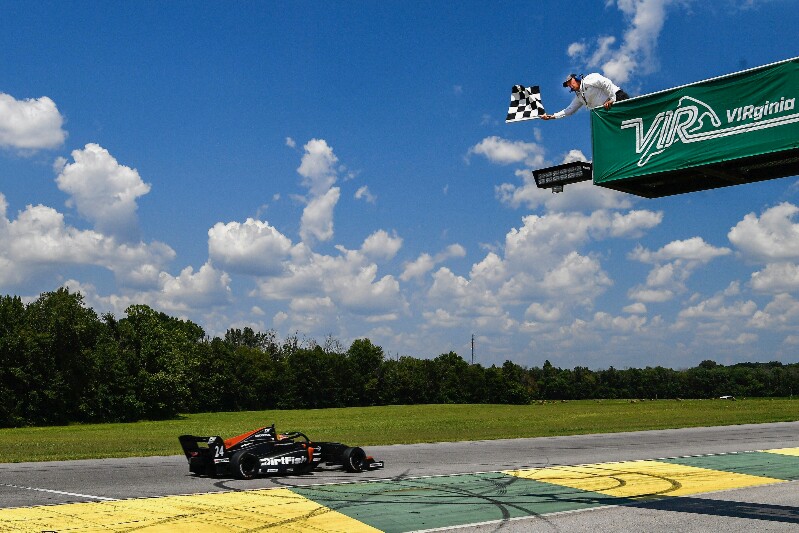 Title contenders Jacob Abel and Baltazar Leguizamon were absent due to calendar clashes, with the latter having now quit F3 because of it, while BRDC British F3’s Pedersen and W Series driver Shea Holbrook returned to the series.

Global Racing Group?s Pedersen dominated qualifying to beat team-mate and championship leader Dakota Dickerson by 0.686 seconds. Parker Locke had provisionally qualified in third place, but lost his fastest lap because of a yellow flag infringement, and he fell to fifth.

John Paul Southern Jr. received a five-place grid penalty for a red flag infringement, and despite being well beyond the 110% qualifying limit, Holbrook was allowed to race.

Momentum Motorsport team-mates Megan Gilkes and Holbrook then made contact on the opening lap of race one, which brought out the safety car.

It was a lights-to-flag victory for Pedersen who beat Mathias Soler-Obel, on the podium for the first time, by 1.495s. Dickerson finished in third, after a spin at Turn 12 in the closing stages, to retain his championship lead.

Soler-Obel led the opening lap of race two, but Pederson quickly took over the position and went unchallenged at the front. With ten minutes to go, a full course yellow was deployed and eliminated Pederson?s 20 second lead.

Racing got back underway with six minutes remaining, but Pederson held on to win by just 0.534s from Soler-Obel, with Quinlan Lall seven seconds back. Dickerson claimed fourth place, despite having a broken front wing.

As Tour de France winner Egan Bernal raced down the Champs-?lys?es, Soler-Obel gave Columbia even more to shout about as he took his first win in race three.

Pederson finished 6.427s behind, with Lall just half a second further back in third. The three podium finishes allowed Pederson to capitalise on Abel and Leguizamon?s absence and move into third place in the championship, with Dickerson extending his lead to 83 points.