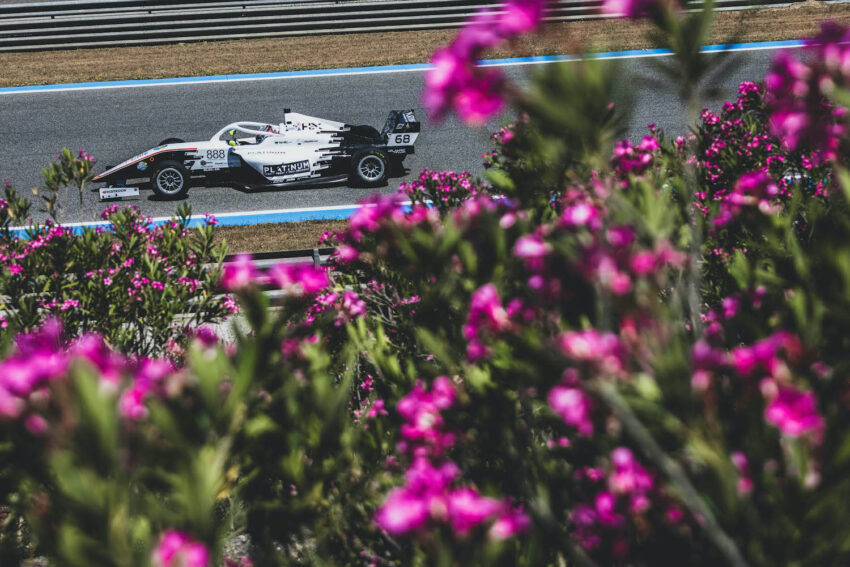 Hugh Barter will start from pole position for the final Spanish Formula 4 race of the weekend at Valencia’s Ricardo Tormo circuit.

The Campos Racing driver pipped points leader and team-mate Nikola Tsolov by 0.017 seconds in Sunday morning’s qualifying session, with the pair only truly featuring at the top of the times late on.

At first it was Formula de Campeones’ Max Mayer and MP Motorsport’s Christian Ho that were trading the fastest lap, before Drivex School’s Bruno del Pino went over half a second faster than anyone else.

Ho reduced the margin to four tenths with nine minutes remaining of qualifying, before del Pino was usurped by MP’s Kirill Smal and Miron Pingasov, who were just 0.044 seconds apart.

Georg Kelstrup then put Campos on top by becoming the first driver to set a lap in the 1m35s, and he was then bettered by Barter. The Australian was only in first place for 10s though, as Drivex’s Gael Julien put himself on provisional pole by 0.605s.

At this point Alvaro Garcia, driving for the local Formula de Campeones team, and Tsolov were the only two drivers yet to set a lap and those who were on track were improving their pace with each lap when avoiding traffic.

Nobody was able to get near Julien’s pace for a while, although new Campos signing Manuel Espirito Santo did go faster than him with his first flying lap but had exceeded track limits so it ended up being deleted, and thenext change at the top came with six-and-a-half minutes to go as del Pino broke into the 1m34s.

Smal was next to go ahead, setting a 1m34.556s, and he was at the top until team-mate Timoteusz Kucharcyzk went 0.164s quicker with just under four minutes remaining. Tsolov had now headed on track and got himself up to ninth place, but with his third flying lap he leapt straight up to pole position.

Barter immediately bettered him by 0.022s, but Tsolov responded only for Barter to outdo him again and this time by 0.017s. That ended up being the battle for pole done, with Kucharczyk third, Kelstrup fourth and Espirito Santo jumping up to fifth with a lap that did stand. He was among five drivers who were warned for track limits abuse.