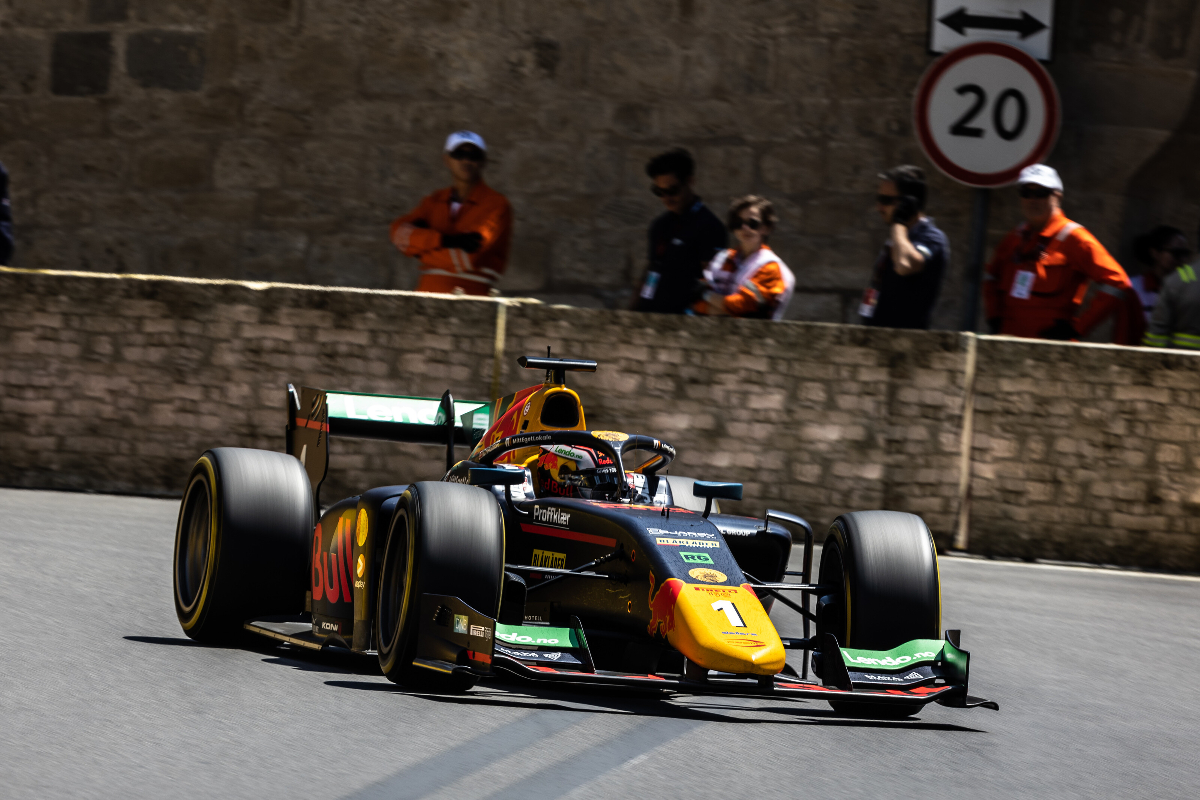 Prema’s Dennis Hauger took victory in the Formula 2 feature race in Baku after Juri Vips crashed out of the lead in the closing stages.

The race finished one lap early and behind the safety car after Vips’ error, with Hauger taking his second win of the season ahead of Carlin’s Logan Sargeant and MP Motorsport’s Felipe Drugovich, who extended his points lead.

Hitech GP driver Vips led away from pole at the start, while sprint race winner Frederick Vesti (ART Grand Prix) was left stranded from ninth on the grid.

Trident’s Richard Verschoor moved up the inside of Drugovich for fifth into turn two, with Sargeant then capitalising to power past the pair of them on the exit, and Prema’s Jehan Daruvala demoting Drugovich to eighth.

Vips started to edge clear once racing resumed on lap five, while Lawson fended off Vips’ team-mate Marcus Armstrong for second, with Hauger following close behind.

Lawson made his mandatory pitstop on lap nine, but he was delayed by a slow rear-left tyre change, costing him a place to Hauger, with the Kiwi then passed by Daruvala shortly after returning to track.

Armstrong stopped one lap later than Vips on lap 11, and briefly emerged from the pits with the net race lead before his team-mate swept back past on the pit straight.

The safety car was deployed for a second time when Cem Bolukbasi and Roy Nissany made contact and ended up in the wall.

Still to pit, Calan Williams led from Vips, but there was plenty of drama at the restart. Ayuma Iwasa ran into the back of Jake Hughes as the cars accelerated to the line, while ART GP’s Theo Pourchaire damaged his front wing and Lawson suffered a puncture in the melee.

Armstrong locked up into Turn 1, running into the back of Vips, who managed to avoid damage and retain second. But Armstrong lost several places before pitting to get rid of his flat-spotted tyres.

Williams continued to lead after a virtual safety car period, but then locked up and ran down an escape road, enabling Vips to resume his place at the front, but he was chased hard by Hauger over the next few laps.

In the closing stages Vips hit the wall in the narrow castle section, ending his race with suspension damage, with the remainder of the race run behind the safety car.

Ralph Boschung was ninth for Campos, ahead of Hughes. MP’s Clement Novalak was another retiree after suffering a technical problem.