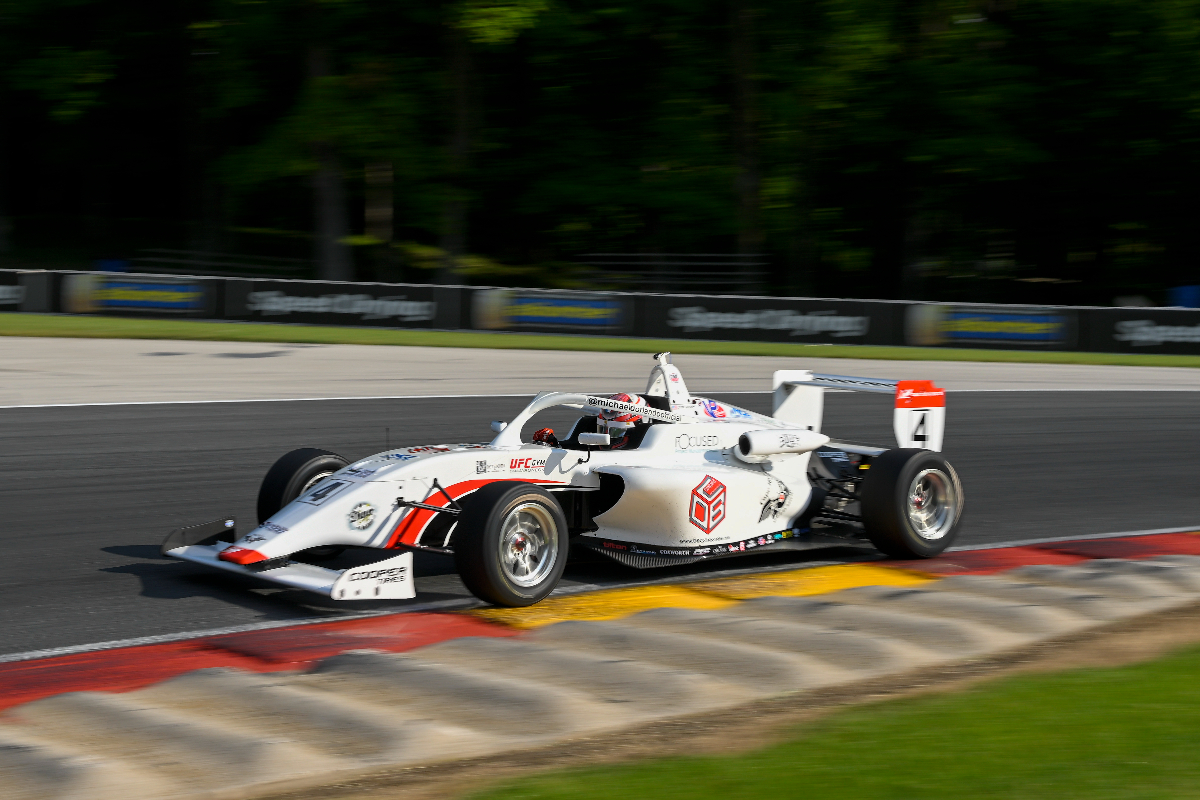 Cape Motorsports’ Michael d’Orlando is back in front in USF2000 after beating title rival Myles Rowe to victory in the second Road America race, which was split in two.

It was a crazy start to the first half of the race, with several corners on the opening lap where drivers were going three-wide. Billy Frazer tried go around the outside of Jace Denmark for second place, but ended up dropping to the back.

Poleman d’Orlando completed the lap as leader, ahead of Pabst Racing’s Rowe, Denmark and Bijoy Garg. A full course yellow was called on lap two, as Viktor Andersson spun off but going again and Danny Dyszelski crashed out.

Green flags were waved again on lap five of 12, and the top three went three wide into Turn 3 after Garg passed Denmark at Turn 1. Garg took the inside line and Rowe had more momentum to get by into the lead, but d’Orlando came back at him at Turn 5 by diving down his inside. They then went side-by-side up the hill, with d’Orlando getting the move done at Turn 6.

The race was soon under FCY again as the recovering Frazer and Jorge Garciarce collided at Carousel. Frazer was trying to pass Garciarce on the inside but it ended up with Garciarce careering off into the gravel. Marshals were able to get his car restarted, while Frazer dropped to the back of the pack again.

Rain drops started to fall during the second FCY period, prompting Trey Burke to pit from towards the back of the order for grooved tyres. The red flags then came though as race control decided everyone else should also switch to tyres suitable for a wet track, but then spent a long time deliberating on whether to return Burke to his original position prior to his pitstop and then eventually decided that drivers didn’t need to switch tyres after all and that Burke would be a lap down.

There was running under yellow flag conditions before the race properly restarted, and d’Orlando held off Rowe in the few laps remaining to snatch back the points lead he lost in the previous race.

Thomas Nepveu passed his DEForce Racing team-mate Garg for third, and Nikita Johnson passed Denmark for fifth in his second race but then dropped down to eighth. Joey Brienza also fell down the order late on, while Frazer recovered to 12th.