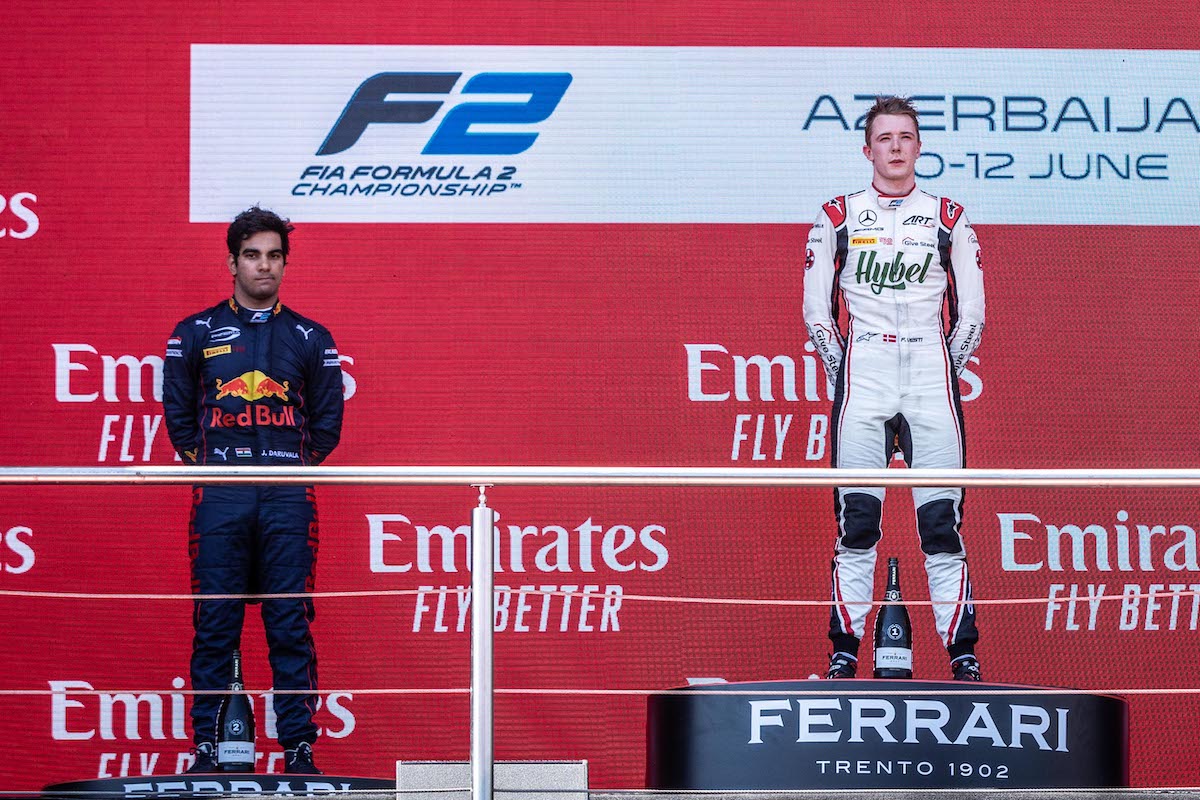 Jehan Daruvala expressed his disappointment after a mistake prevented him from taking his first win of the Formula 2 season in Baku, with Frederik Vesti instead picking up his maiden victory.

Prema driver Daruvala was on course to claim his first win of the season in Formula 2’s Baku sprint race. However, a mistake at the second safety car restart cost him first place, when the Indian driver went wide at turn one and ART Grand Prix’s Vesti didn’t miss the chance to take the lead of the race.

“I would be lying if I said I’m not disappointed,” Daruvala said in the press conference afterwards. “But I’m still happy with the race I did. You know, I made one little mistake on the restart which definitely was my fault. The unfortunate thing is I didn’t have any laps to fight back because of the constant starts and stops. So, it’s unfortunate.”

Before that, the Red Bull junior had taken the lead of the race at the first corner and soon left Van Amersfoort Racing’s Jake Hughes, who ran in second place, out of DRS distance. Daruvala’s pace was brilliant and when Vesti managed to overtake Hughes, he already had a comfortable four-second gap, which he lost when his team-mate Dennis Hauger crashed out of the race on lap 14 of 21.

“I had a decent start, I think everyone in the top four or five had a similar start, but I think I used my experience from last year pretty well. It’s quite tricky with low downforce, and on corner one I got a good exit.

“Obviously, Frederik went really wide, and we were three abreast going into turn 2. With these types of 90-degree slow corners, the guy on the inside has always got a bit of an advantage, so I just braked later and got the move done. I knew that Jake was running a low downforce setup, so I needed to break away from him as quickly as I could and to be fair, everything was going to plan until lap 17,” Daruvala explained.

Vesti, who took advantage of Daruvala’s mistake to win the race, showed his happiness about the progress made.

“I feel really good. We’ve done so much hard work to get where we are now, and Barcelona was obviously a really good step forward.”

However, the Mercedes-AMG junior is hungry for more and has set his sights on a Sunday victory.

“My start in F2 has been quite rough, so I’m really happy to finally win my first race. It is a sprint race win, I’m looking to win a feature race, so I wouldn’t call it the most important of my career. But it’s a good start, and we’ll push on from here.”