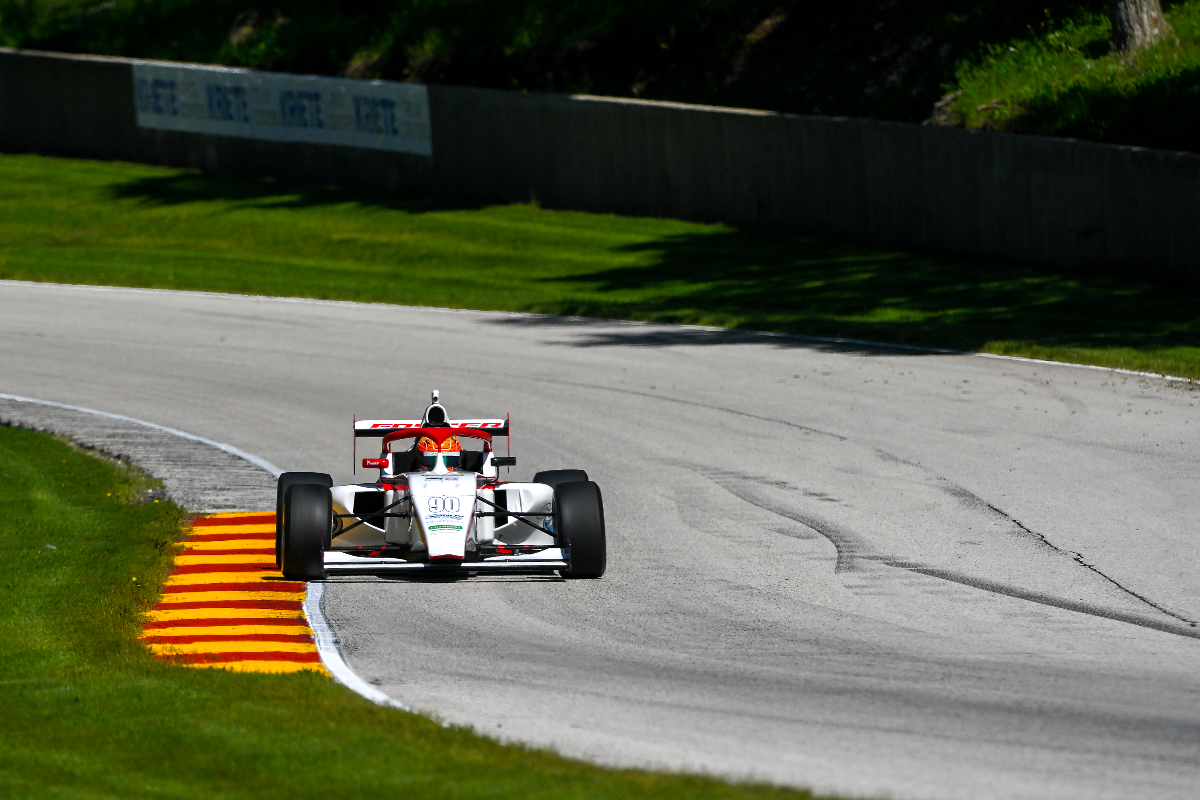 An opportunistic lap one move by Louis Foster set up a third successive Indy Pro 2000 win for the Exclusive Autosport driver.

Foster started third behind Juncos Hollinger Racing pair Reece Gold and Enaam Ahmed, but was leading by Turn 5 as he dived down the inside of the front-row starters who had gone side-by-side through Turn 4 but then went way off track at the exit of the following corner where there was droplets of rain.

Jay Howard Driver Development’s Salvador de Alba also tucked in to the inside line and emerged in second, as three other drivers went off track and Foster’s team-mate Lindsay Brewer launched herself off a kerb and into retirement on the run to Turn 5.

Her crash resulted in the pace car being called out, and behind the new top two the order was Braden Eves, Josh Green, Jack William Miller, Kiko Porto and then the top two starters.

Racing resumed on lap three and Foster immediately set about establishing himself up front ahead of JHDD duo de Alba and Eves.

Turn 3 Motorsport’s Josh Green passed Eves for third on lap four, then cleared de Alba on the next lap. While he couldn’t then chase down Foster, he was able to break away from the fight that continued for third place.

The recovering Juncos drivers returned to contention, helped by the JHDD pair squabbling, and Ahmed passed Jack William Miller before he hauled in de Alba. Through two laps there was several position changes between the quartet before Gold dropped back, and Ahmed and de Alba were still going side-by-side until the penultimate lap.

Foster – who will start race two from low down the grid due to gearbox issues in the second qualifying session – crossed the line after 15 laps with a 3.6-second advantage over Green, and it Ahmed who completed the podium a further 4.4s back.

De Alba was fourth and Eves was fifth, while Gold fell back into the queue of cars from seventh place downwards and was briefly passed by Pabst Racing’s Colin Kaminsky before he went wide and sixth place returned to Gold.

Jonathan Browne also had a wide moment earlier on which dropped him from seventh to eighth, and he had pulled the queue of cars onto the rear of the battle ahead, while Jordan Missig and Yuven Sundaramoorthy – who had electrical issues through practice and qualifying – completed the top 10.

A lap down were Miller and Kiko Porto, who picked up front-end damage.