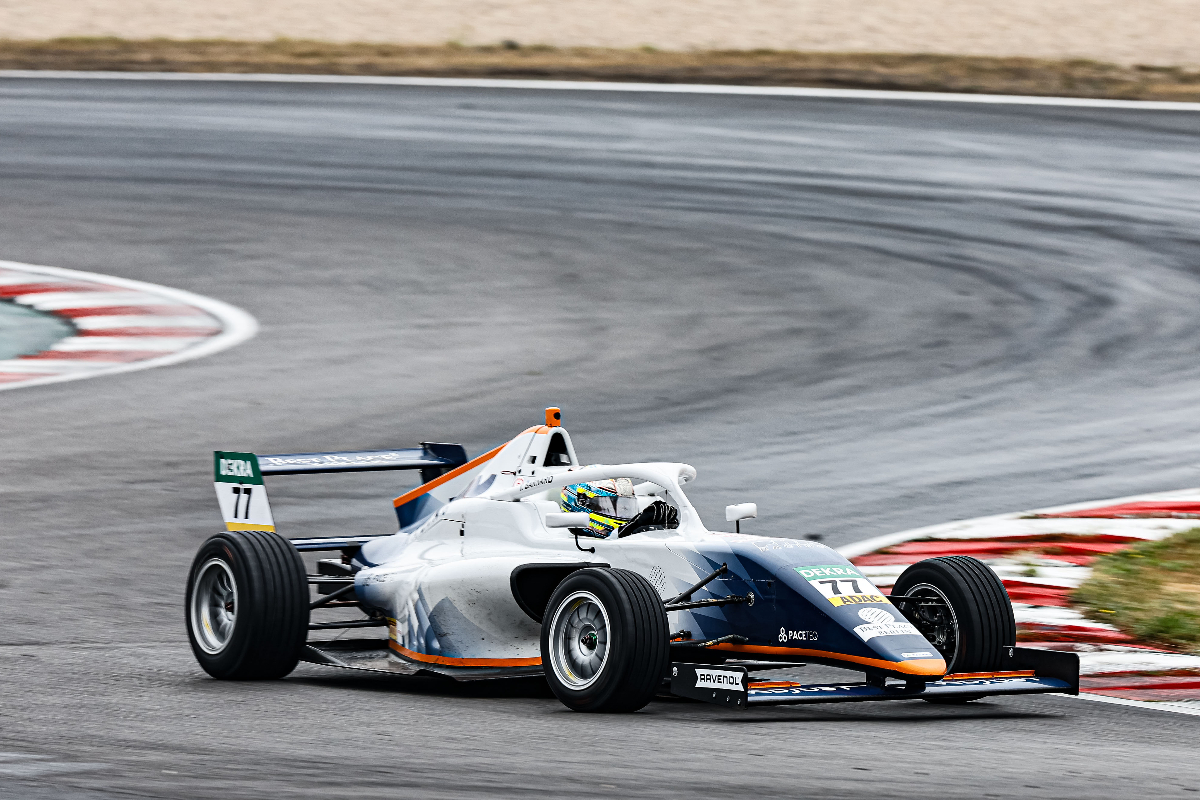 PHM Racing’s Taylor Barnard claimed his third ADAC Formula 4 win of the season in the second race at the Lausitzring.

Barnard started from pole and had a clear run to the opening corner as fellow front-row man Kacper Sztuka was slow off the line and so it was PHM team-mate Nikita Bedrin who was in second place once the driver hit the brakes for the first time.

Bedrin did not have the pace to match Barnard though, being gapped by 1.34 seconds in the opening lap and sitting two-and-a-half seconds behind the leader when the safety car was brought out on lap six after Michael Sauter crashed out on a track still greasy from rain the day before.

When racing resumed the action had a similar pattern to before with Barnard breaking away while this time US Racing’s Sztuka stuck with Bedrin after shaking off Jenzer Motorsport’s Rasmus Joutsimies.

The battle for second place allowed Barnard to grow his lead quicker than before, and he ended up taking victory by 4.458s and reducing the gap to absent championship leader Andrea Kimi Antonelli to 59 points with 92 still available to add to Barnard’s tally in the remaining races.

Although Sztuka stuck to Bedrin’s rear, he went many laps without thinking of making a pass. Eventually he attempted a move down the inside of turn one but Bedrin covered it off, and on the lap after he went for the dummy at the corner but had to back out of it.

One final attempt came on the final lap, and Sztuka took second down the inside of turn one after being squeezed all the way down the pit straight.

Joutsimies faded to sixth in the second half of the race, losing time as he was passed by PHM duo Jonas Ried and Valentin Kluss at turn one on successive laps and then coming under late pressure from his own team-mate Nandhavud Bhirombhakdi.

Ried looked on for fourth after his pass on Joutsimies, but Kluss crept up on him and on the penultimate lap lunged down his inside at turn one. Ried ran wide and his car squirmed exiting the corner, which was enough for Kluss to get the move done through turn two.

Behind them was Zachary David who stalled from fifth on the grid and fell to last but after the safety car period was able to regain a few spots and then keep pace with the group ahead as Jenzer’s Samir Ben and US team-mate Ruiqi Liu squabbled for ninth.