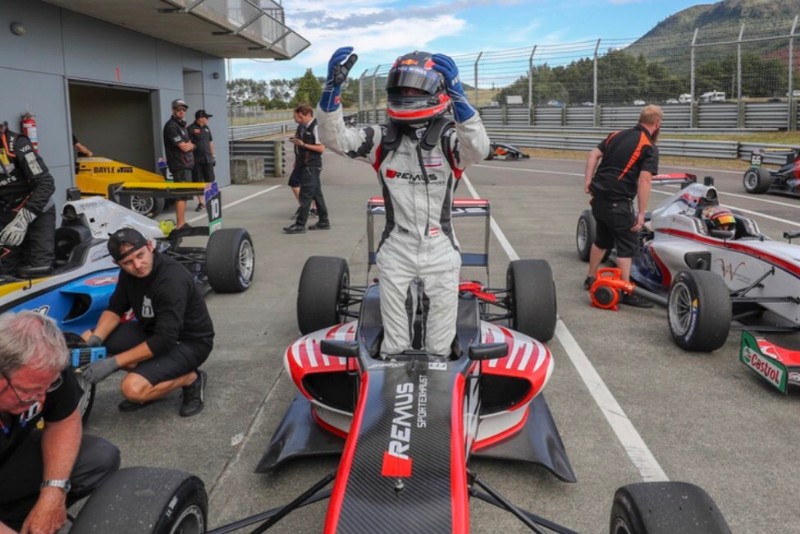 Lucas Auer claimed his first Toyota Racing Series victory of the season at Taupo as a Marcus Armstrong off meant the championship lead changed hands once again.

M2 Competition driver Armstrong had been second after a lightening start allowed him to shoot up the inside of title rival Liam Lawson off the line. He was running close behind Auer when the championship leader locked up at turn one, running wide over the gravel and suffering a suspension failure.

He limped back to the pits and, though he returned to the track five laps later, didn?t cover the minimum race distance to be classified.

Lawson capitalised on team-mate Armstrong?s drama and rapidly closed the gap to Auer. The Austiran didn?t put a wheel wrong in the lead though and crossed the line half a second ahead of Lawson to take his first win since his return to single-seater racing at the beginning of the TRS season.

Second was enough to put Lawson at the top of the championship standings, five points ahead of Armstrong with five races remaining.

Giles Motorsport’s Raoul Hyman spent the first half of the race with Artem Petrov and Brendon Leitch ? who had started 11th?? on his tail. Petrov pushed hard but his attack allowed Leitch to pull alongside the Russian and take fourth.

As Leitch and Petrov battled, Hyman was able to pull away. He finished third, albeit almost 12 seconds behind Lawson. Petrov passed Leitch in the closing stages of the race to take fourth.

Kazuto Kotaka suffered another disappointing race. He had been running strong before losing his front wing and plummeting down the order. He finished 15th, ahead of only Armstrong.

It was a similar story for Cameron Das, who also suffered front wing damage, and finished the race in the pits. There was consolation in that he still managed 10th place.