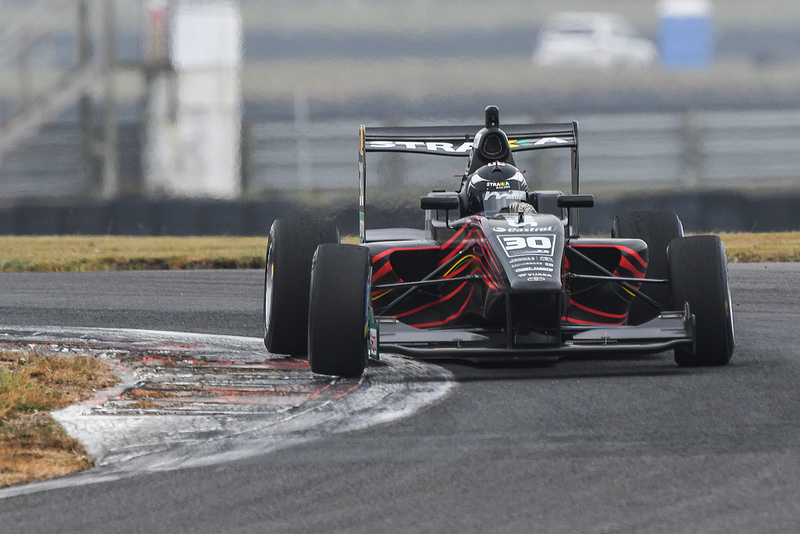 Andre Lotterer protege Muth started from pole on the reversed grid and spent the entire race with Brendon Leitch on his tail. The 17-year-old Beglian soaked up the pressure up front and didn?t put a wheel wrong throughout the 15 lap encounter, finishing 0.247 seconds ahead of Leitch.

Lawson made a strong start from the third row of the grid to snatch third off the line, and challenged Leitch for second in the early stages of the race. He settled back into third, but remained close to the Victory Motor Racing driver throughout. The bottom spot of the podium was enough to extend his points lead over M2 Competition team-mate Marcus Armstrong to 13 points.

After a suspension failure in race two, Armstrong started from the back of the field. He made progress in the opening laps – including jumping three cars in one corner on the first lap, and became stuck in a tight five-car battle at the back of the top 10 midway through the race.

Dev Gore, Calan Williams, Jackson Walls, and Kazuto Kotaka all jostled for position, holding Armstrong up for a number of laps before he managed to find a way through in decisive style and began rapidly closing the gap to seventh placed Lucas Auer.

He ran out of time to get past the Austrian, who won race two, but will at least be starting from further up the grid for the final race of the weekend, albeit behind Auer again on the front row.

Ahead of them, but a fair distance behind the podium trio, were Artem Petrov, Cameron Das and Raoul Hyman. The combined points tally of Muth, Lawson, Petrov, Das, Auer and Armstrong means M2 has already secured the teams’ title with four races to spare.

After being bettered by Armstrong, the squabbling bunch of cars in the lower half of the field continued to fall further back, with Calan Williams leading MTEC Motorsport team-mate Kazuto Kotaka home in ninth.