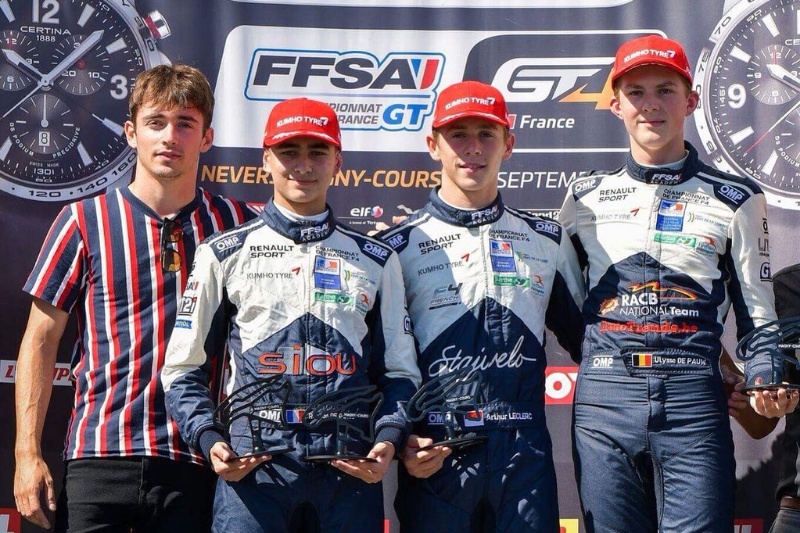 Arthur Leclerc scored his second French Formula 4 victory on the final lap of race two at Magny-Cours after starting seventh on the reversed-grid.

The younger brother of Formula 1 driver Charles Leclerc snatched the race lead through the high-speed Imola chicane for the final time after running side-by-side with Reshad de Gerus for a large portion of the lap.

De Gerus had spent the first half of the race pressuring pole sitter Mateo Herrero for the lead, the pair building a lead to the rest of the field while Leclerc led a train of cars from third position.

Leclerc had started to close the gap when drama unfolded behind him.

Shihab Al Habsi had locked up as the midfield bunched together to turn the Adelaide hairpin and cut across the front of Romain Boeckler and Baptise Moulin. All three were wiped out of the race and the safety car was brought out to recover the beached cars.

The race restarted with less than seven minutes on the clock. De Gerus immediately resumed his attack on Herrero, but this time with Leclerc sticking close behind. Herrero put up a strong defence, but de Gerus found a way past with a move past the inside of the polesitter and Leclerc was able to quickly follow.

As the leading trio battled, Adam Eteki struggled to defend his P4 on the restart and a wide moment for the Frenchman dropped him down the order. De Pauw was promoted to fourth and began to chase after the leaders, who had already begun to escape up the road, bringing race one winner Caio Collet with him.

The top four spent the final laps of the race running almost nose to tail, with Leclerc attempting a daring move around the outside of de Gerus entering Imola.

Leclerc received his winning trophy on the podium from his brother, who had also been there for support when he won at the season opener at Nogaro.

He finished just 0.523s ahead of de Gerus,?with de Pauw completing the podium.

Collet finished fourth after dominating the opening race of the weekend. He was unchallenged at the front of the field and spent the 13 lap race gradually building a gap to the rest of the field to finish 2.254s ahead.

Theo Pourchaire took second in his first race since turning 15 last month, but was forced to retire from race two with a mechanical problem at the start of the race. Eteki rounded out the podium, with Leclerc fourth after qualifying down in 10th.

It was a difficult day for championship contender de Wilde, who was forced to retire from the opening race of the weekend after an incident with Eteki. He managed to climb up through the order in race two to eventually finish fifth, but it wasn?t enough to keep him at the sharp end of the order, with de Pauw moving up to second in the championship standings, 30.5 points behind Collet