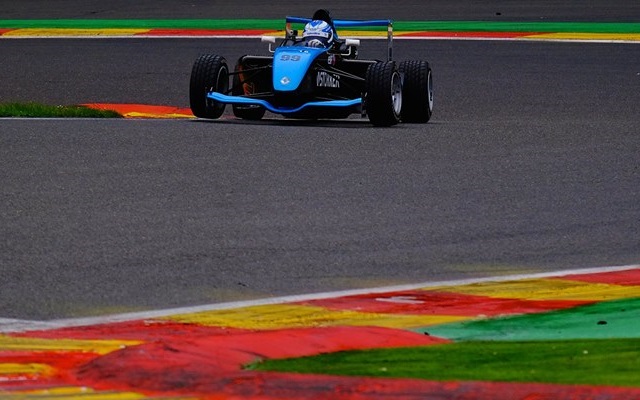 Estonian youngster Ralf Aron took his sixth podium finish in a row with a convincing victory at the Spa-Francorchamps.

It was Paul Sieljes who started from the pole, yet title contender Janneau Esmeijer did everything to keep his championship hopes alive and took the lead early on.

The Dutchman soon came under pressure from Aron and the pair made contact, leading to Esmeijer retiring as Aron kept the lead.

As a result, it was Lechner duo Florian Janits and Max Defourny who completed the podium, with Nico Otto taking fourth for Captain Racing.

The second half of the Lechner team – Ferdinand Habsburg and championship leader Anton de Pasquale – finished fifth and sixth respectively.

Swede Oliver Soderstrom took seventh, followed by German racers Cedric Piro and Marcel Lenerz, while the top ten was completed by Boris Kolff, who was set back by his choice of racing on slick tyres. Polesitter Sieljes was forced to retire after three laps due to mechanical problems.

As the final round at Zandvoort will reportedly consist of three races, there are still 90 points up for grabs until the end this season.

However, since De Pasquale’s lead over Aron and Esmeijer is 79 and 82 points respectively, the Australian still looks set to clinch the title early.