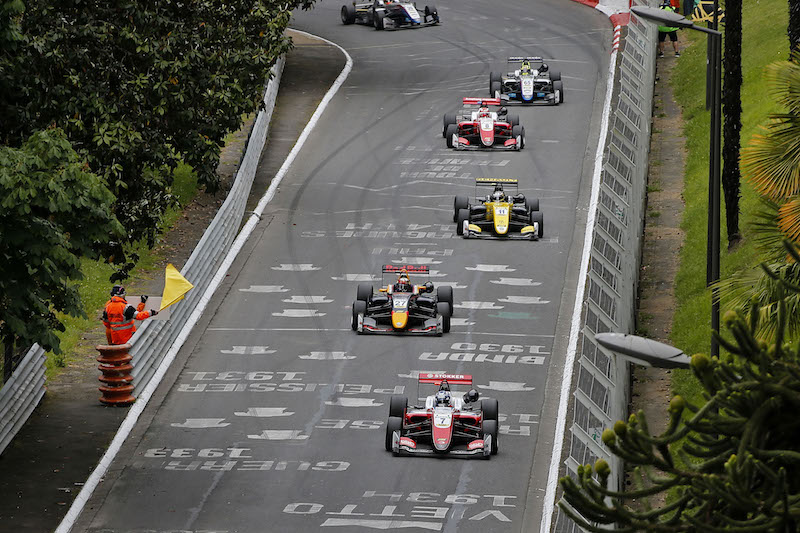 Ralf Aron has rebuffed Dan Ticktum’s suggestion that his around-the-outside overtake on the Briton to claim second place in the first race of the Formula 3 European Championship season in Pau was “a bit kamikaze”.

Aron pounced on Ticktum on a safety car restart early in the race, going around the outside of the Gare right-hander to take second place despite contact between the two.

Ticktum, who had qualified on pole position but lost the lead at the start to eventual race-winner Guan Yu Zhou, believed the move was “on the limit”.

“People could say it was a good move going around the outside but I think if you make contact I wouldn’t necessarily agree,” said Ticktum.

“It was on the limit. A bit kamikaze you could say for the first race of the season. But he did get the job done so well done to Prema.”

Asked for his response to those comments, Aron said he felt that it was instead Ticktum who made “a stupid move”.

“To be honest, I would say completely the opposite,” the Estonian told Formula Scout.

“He braked so early into Turn 1, probably because of pressure. I braked at my braking marker, I was way ahead of him, and in the middle of the corner he just released his brake and came into me.

“I would say he made a stupid move because it’s the beginning of the season. If you got a puncture or a broken front wing then that’s it. In the end I’m glad it worked out.”

Ticktum added that he believed he had the pace in his Motopark-run car to beat Zhou and Aron to the win.

“I have to say I do believe that if I got a good start, the pace was far superior to those two,” he said.

“It is what it is and I will do my best for [second] qualifying, and next time I’ll try and keep the lead.”