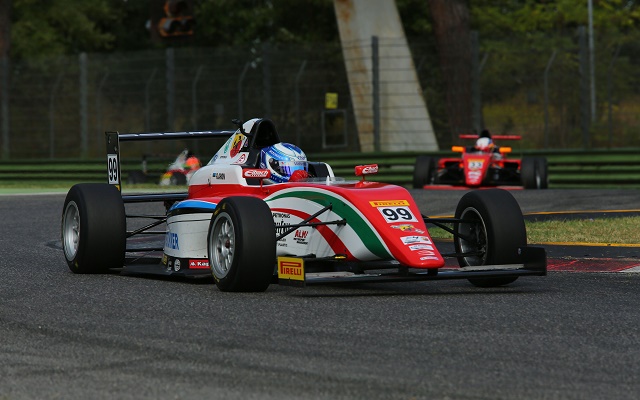 Italian F4 runaway points leader Ralf Aron has secured double pole position in the two qualifying sessions of the penultimate round at Imola.

Aron, who could clinch the championship this weekend, saw off teammate Guan Yu Zhou in the first qualifying before the duo were split by three Mucke cars in session two.

It was all about Prema duo Aron and Zhou in the opening session, the pair establishing a massive advantage over the rest of the field.

With Aron eventually heading Zhou by three tenths, Robert Shwartzman was best of the rest in third, a full seven tenths off the Estonian and just narrowly ahead of Marcos Siebert and teammate David Beckmann.

A strong showing for RB Racing saw Diego Bertonelli and Ye Yifei in sixth and seventh, while Joao Vieira, Alex Peroni and Mucke guest Lando Norris made up the top ten.

Norris was much stronger in the second qualifying, picking up third behind Aron and Shwartzman, with teammate Beckmann alongside him on row two.

Zhou was fifth, ahead of Peroni and Raul Guzman, with Siebert, Yifei and Giuliano Raucci completing the first five rows.