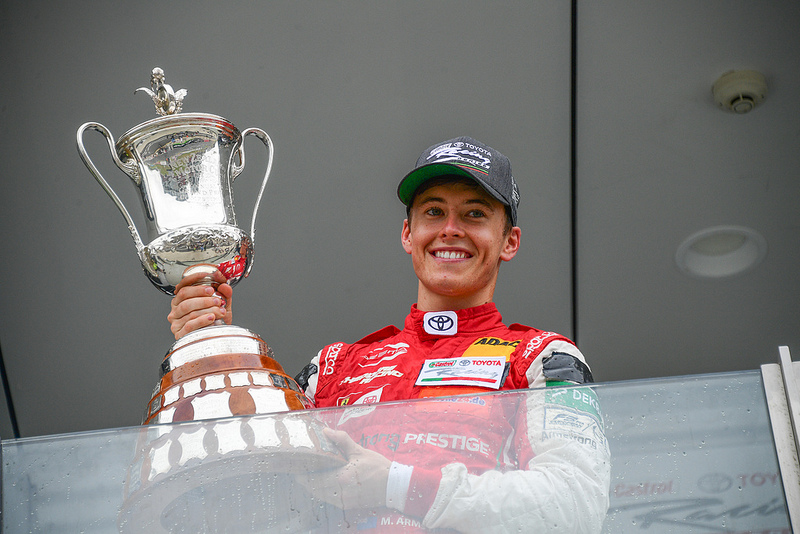 Marcus Armstrong won the New Zealand Motor Cup in a lights-to-flag display at Hampton Downs, as rival Liam Lawson crashed out and conceded the championship lead.

Lawson went into the race ahead of M2 Competition team-mate Armstrong in the standings, but ended his race early after hitting Lucas Auer as they battled for second position. The New Zealander span, ran backwards through the gravel, and hit the wall hard, though he was able to climb out of his M2 Competition run car unaided.

The incident prompted red flags to recover Lawson?s car, after which Armstrong was untroubled and came home to take his third victory of the season and a 34 point lead in the standings.

Auer had been close to Armstrong in the first part of the race, but came under pressure from Artem Petrov after the red flag period. Petrov kept the pressure on Auer, but the Austrian didn?t put a wheel wrong, until he began to slow with just a handful of laps remaining.

The Red Bull junior cruised into the pits with a mechanical issue, letting Petrov move into second. Petrov chased after Armstrong, slicing a gap that had been more than two seconds down to 1.319s by the chequered flag, but he ran out of laps before he could catch the race leader.

Cameron Das took third after a tight battle with Brendon Leitch. The pair ran side by side as Leitch tried to defend, allowing Raoul Hyman to close onto the back of the battle. Das managed to get past, but Hyman couldn?t find a way through and span out of the fight before he could take a position, taking the chequered flag in 12th.

Leitch finished fourth, ahead of Petr Ptacek, Esteban Muth and Kazuto Kotaka. A penalty for Ptacek dropped him to 12th though, and a similar punishment for 10th placed Petru Florescu meant Asian F3 champion Hyman ended up back in the top 10.

That means Hyman retains third in the standings, with Leitch now in fourth ahead of Auer.