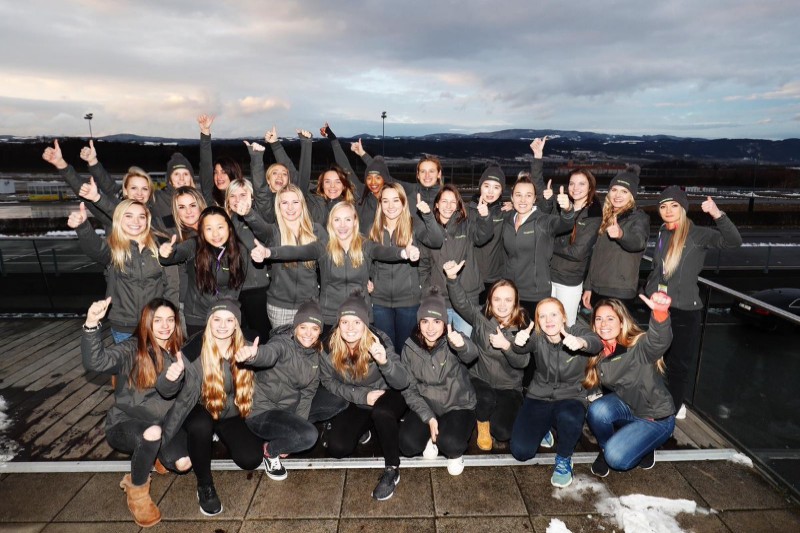 The W Series will be one of the biggest talking points in junior single-seaters in 2019, whether it be a success or failure, and whether that’s because of what happens on or off track.

Championship CEO Catherine Bond Muir and her colleagues have decided upon a multiple stage qualification format to pick the drivers that will race the Hitech GP-prepared Tatuus regional Formula 3 cars this year.

A total of 54 attended an Austrian training camp last weekend to go through physical, mental and driving tests, where they were held up to the criteria previously used by the FIA Young Driver Excellence Academy and then whittled down in number by a judging panel including former Formula 1 drivers David Coulthard and Alexander Wurz.

The next stage of the selection process in March, which includes track runs in the Tatuus car, takes place at the Almeria circuit in Spain and will decide the 18-car grid. Here is a guide to the 28 shortlisted drivers and their motorsport achievements.

Sarah Bovy?BELGIUM 29y/o
Mostly an endurance specialist. Most recently, she has been campaigning a Lamborghini Huracan in the Lamborghini Super Trofeo and the Spa rounds of the Blancpain Endurance Series. She has experience in Porsches and a selection of saloons including Clios. She did start her career in single-seaters in 2004 and showed promise, but did not have the funds.

Jamie Chadwick?BRITAIN?20y/o
Probably the best known name to qualify. BRDC British Formula 3 race-winner Chadwick currently leads the MRF Challenge, and was British GT4 champion in 2015 aged 17. Recently, she has been testing for the NIO Formula E team and impressed massively. Her recent F3 experience will give her a obvious advantage.

Sabre Cook?USA?24y/o
Cook raced in USF2000 and United States Formula 4 last year, with her single-seater experience prior coming in the lower key SCCA Runoffs, following success in karts. She weathered some spills in USF2000 and mostly held her own. She’s also part of the Infiniti Engineering Academy, which could fast-track her to an F1 role.

Natalie Decker?USA?21y/o
Decker’s racing experience comes almost exclusively from stock cars in the States, and is where her ambitions lie. She did a full season of ARCA racing in 2018 and picked up nine top-10 finishes, including a fifth place at Daytona from pole. This was her first full season of racing after a decent ARCA part-season and some unsuccessful NASCAR Trucks appearances.

Marta Garcia?SPAIN?18y/o
A Renault F1 junior during her first full year in cars in 2017, Garcia scored points regularly in Spanish F4 but didn’t do enough to maintain the manufacturer’s interests.? Her first season aged 15 had been impressive though, and her karting career at home and abroad has brought her considerable success.

Megan Gilkes?CANADA?17y/o
A frontrunner in the Canadian F1200 (Formula Vee) championship for the past two years. She has won three races in her two seasons in the championship and come third and second overall. Her experience at higher levels of racing is limited and she did struggle somewhat when she appeared in the F2000 Championship Series.

Grace Gui?CHINA 27y/o
One of the least-known names on the list, Gui competed in Asian Formula Renault in 2017. She was a second in the championship’s ‘B’ class for older machinery, where she only had one other full-time opponent.

Esmee Hawkey BRITAIN?20y/o
Took two class podiums and a pole in Porsche Carrera Cup GB last year. She plans to combine the W Series with another season in the TOCA paddock. Her only previous racing experience has come in Ginetta Juniors.

Jessica Hawkins?BRITAIN?23y/o
Hoping to return to racing after a year out working as a stunt driver. She was second in Mini Challenge GB in 2017, winning five times, and has previous in single-seaters through the MRF Challenge and British F4.

Shea Holbrook?USA?28y/o
Primarily a touring car racer, Holbrook has a good pedigree in the Pirelli World Challenge touring car class, finishing second in the standings in 2014 with her own team. Two years ago she branched out into sportscars too, but has no notable single-seater experience to speak of.

Francesca Linossi?ITALY?26y/o
Most of Linossi?s experience comes from one-make series, for both touring and sportscars. She has had a couple of seasons in the Italian GT championship, and most recently has been competing in the Lamborghini Super Trofeo, and was a visitor to the podium last year in the Pro-Am class.

Vivien?Keszthelyi HUNGARY?18y/o
Keszthelyi is currently racing in the Asian F3 Winter Series, and is set to compete in the main season too. She was a teenaged prodigy in touring cars in Eastern Europe, and was on the podium in the Suzuki Swift Cup, the equivalent of Ginetta Junior, aged just 13. She won her first races in 2015 and has been on a roll since. After receiving Audi backing, she finished second in the DTM-supporting R8 LMS Cup last year.

Emma Kimilainen?FINLAND?29y/o
Started her career in Finnish Formula Ford in 2005, where she was no slouch, and switched to Radicals before a hiatus for motherhood in 2009. After that she switched her focus to touring cars, where she has proven herself as a winner in Scandinavia.

Natalia Kowalska?POLAND?29y/o
Ambitious racer who scored points in MSV Formula Two in 2010. Financial problems and injuries; problems stemming from a crash in ’10 and then the aftermath of a road traffic accident two years later has meant she hasn’t really been seen on tracks since. Her?Elite Racing Development programme in Poland has meant she has remained in motorsport though.

Stephane Kox?NETHERLANDS?25y/o
Mostly an endurance specialist who has been competing in the European GT4 and Asian Le Mans series recently. She has one championship win to her name: the 2015 Belgian BMW M325 Racing Cup. In terms of single-seaters, she finished 16th in ADAC Formula Masters, ADAC F4’s predecessor, in 2013.

Miki Koyama?JAPAN?21y/o
The driver with the most experience of single-sex motorsport, Koyama has won Japan?s all-female Kyojo Cup twice. She has also raced in Japanese endurance events, but in single-seaters she can only claim to be a Japanese F4 backmarker.

Milou Mets?NETHERLANDS?28y/o
Another relatively obscure figure, Mets has been racing in the NASCAR Whelen Euro Series-supporting Late Model V8 championship. Further details of her career are hard to track down.

Sarah Moore?BRITAIN?25y/o
Moore has won two championships during her career: the 2009 Ginetta Junior title and the 2018 Britcar Endurance championship. Despite her strong on-track skills and good connections, she has struggled to compete at the level of which she is capable. Her only single-seater experience comes from the 2011 Intersteps (Formula BMW) series, in which she was sixth.

Tasmin Pepper?SOUTH AFRICA?28y/o
Raced in Formula Volkswagen in South Africa between 2008 and 2012, finishing second in the championship in 2010. She clearly has single-seater talent, having had good runs in Formula Ford even earlier, but she has been squarely a touring car driver since 2013.

Vicky Piria?ITALY?25y/o
Recently came back to motorsport after a four-year break, making a couple of guest appearances in the Italian Porsche Carrera Cup in 2018. She has considerable single-seater experience up to GP3 level, having competed with Trident Racing in 2012. Her best season was a year later, where she finished 10th in Euroformula Open.

Alice Powell?BRITAIN?26y/o
Powell’s sole GP3 points finish in 2012 failed to keep her there another season, and instead she headed back down the ladder to win the Asian Formula Renault title, essentially her second championship triumph at that level. She also took wins in British F3’s National Class and the MSV F3 Cup, but funding cut her career in the seat short. Her driver coaching is highly rated, and her return to the cockpit in the FE supporting Jaguar I-Pace eTrophy demonstrated her tremendous racecraft.

Gosia Rdest?POLAND?26y/o
Mainly concentrating on GT racing in Europe where she is a winner with Audi R8s and TTs, Rdest’s best performances seem to actually come in endurance races further afield. Five years ago she raced in BRDC British F4, but failed to make an impression.

Naomi Schiff?BELGIUM/SOUTH AFRICA?24y/o
One of successful GT team Reiter Engineering?s stable of KTM X-Bow drivers active across Europe. She usually performs well in the GT4 class. She was Chinese Clio Cup champion in 2014, and has made some odd appearances in FR2.0 races.

Shirley van der Lof?NETHERLANDS?32y/o
The eldest of the 28 qualifiers, Van der Lof took a long sabbatical from racing between 2012 and ’18, returning in historic competitions. She has considerable experience of single-seaters, including race-winning form in the Remus F3 Cup.

Beitske Visser?NETHERLANDS?23y/o
Visser burst onto the scene in 2012, winning twice in ADAC FMasters. This earned her Red Bull junior status, but her second car racing season was no better and she quickly lost that backing. Regardless, she progressed up the single-seater ladder, making it to Formula V8 3.5. Since then she’s become a BMW junior and switched to sportscars, winning on several occasions in European GT4.

Alexandra Whitley?AUSTRALIA?25y/o
Most of Whitley?s racing experience comes from pickup trucks; she has been racing SsangYong Utes in New Zealand since 2014. The Ute series attracts several female drivers and she has been the best of them. Although she hasn’t been the class of the field, the Antipodean series always have a high standard of competition.

Fabienne Wohlwend?LIECHTENSTEIN?21y/o
After starring in karting in her home country and Switzerland, Wohlwend graduated to cars in 2016 in Italian F4. A pointless season led to a switch to the Ferrari Challenge for ’17, where she rediscovered her winning form. She won the Am section of the World Final last year and finished second in the same class in the European championship. Her recent single-seater experience could prove advantageous.

Caitlin Wood?AUSTRALIA?21y/o
Another member of Reiter’s young driver programme, Wood has been racing sportscars since 2016. Her 2018 season was curtailed by a broken leg she incurred during training. Prior to that she raced in FFord extensively in Australia, but never finished on the podium.