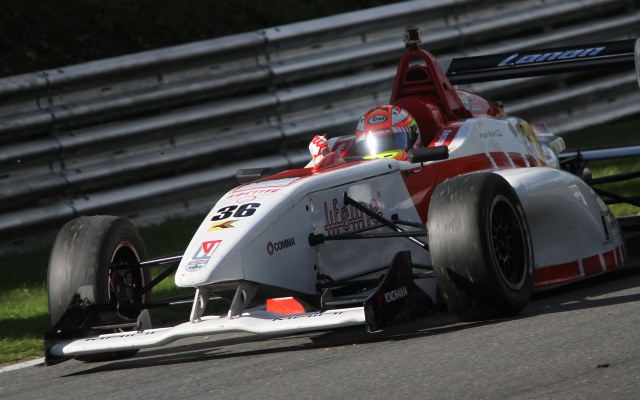 Indian BRDC F4 driver Arjun Maini made up for the disappointment of spinning out of the lead in race two at Brands Hatch by taking the spoils in the final race of the weekend, moving to just nine points off the top of the standings.

Lanan driver Maini started the race from pole thanks to setting the fastest lap of the earlier two races at the Kent venue, ahead of race one winner Gaetano di Mauro.

The top two remained in position off the start and although di Mauro stayed well within a second of the leader for the entire race, Maini held on up front and claimed his third win of the season by 0.7 seconds.

Struan Moore held third throughout, while Sennan Fielding took fourth away from George Russell at the start. Although the top five stayed in formation from the first lap, Russell finished within 2.5s of his team-mate Maini.

Nine seconds further back in sixth was Rodrigo Fonseca, holding off Jordan Albert – a triple points scorer in SWR’s first weekend as a Caterham F1-affiliated team.

Coming into the race just three points behind leader Russell, Raoul Hyman started 12th and lost two positions on the opening lap to finish 14th. He is now 13 points behind Russell, and has dropped to third place, four off Maini.