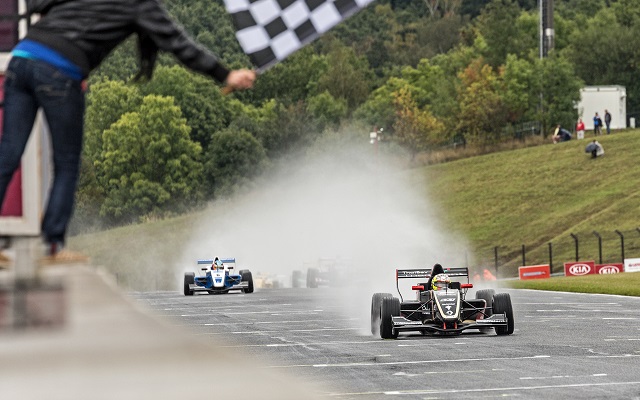 KTR’s Alex Albon was victorious in the rained out second Formula Renault 2.0 NEC race of the penultimate round of the season at Most.

Due to the difficult track conditions, the race started behind the safety car with poleman Raoul Owens leading the field.

However, once the race got green-flagged, Albon managed to steal the lead from the Mark Burdett Motorsport driver. The Thai racer held on to first until a spin from Stefan Riener brought out the safety car, which ended up staying out until the end of the race.

As such, Albon got to celebrate a long-overdue first win in single-seaters. Owens finished second to secure his first podium finish of the year while Seb Morris ended his weekend with another third place.

Steijn Schothorst‘s fourth place made up for some the damage caused to his title credentials by his retirement in race one.

The rest of the top ten was completed by Manor’s Andrea Pizzitola, Euronova’s Ukyo Sasahara and JKR’s Louis Deletraz.

Before the final event at the Nurburgring, Barnicoat is leading the championship by 12 points ahead of Deletraz and by 24 ahead of Schothorst. Morris, O’Keeffe and Sasahara also remain with a mathematical shot at the title.