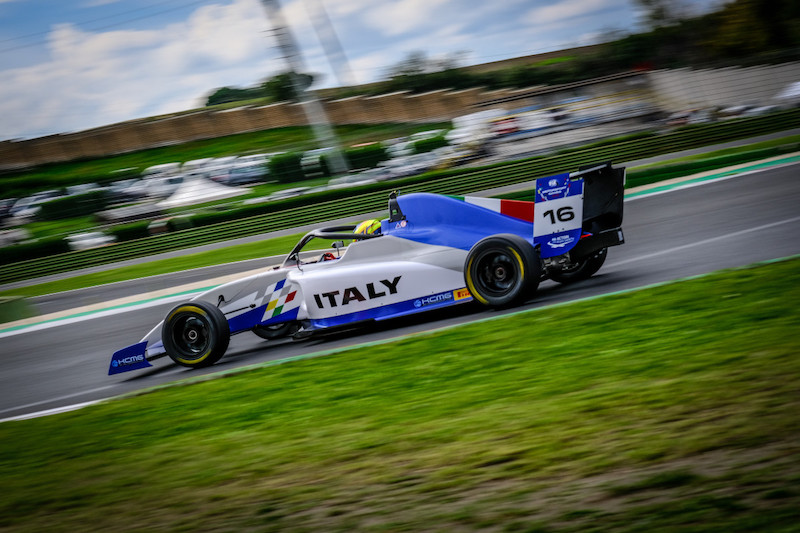 Andrea Rosso led the way for Italy on home soil in both practice sessions ahead of the inaugural Motorsport Games Formula 4 Cup at Vallelunga.

The two 45-minute sessions provided the 20 drivers to familiarise themselves with the hybrid-powered, halo-equipped cars developed for the event by KCMG and operated by Hitech GP.

That was 0.479s ahead of Germany’s ADAC F4 race-winner Niklas Krutten, with Laszlo Toth just 0.03s further behind in third for Hungary.

Rosso managed to narrowly better his time in the afternoon, posting a 1m36.003s before heavy rain set in.

Toth, who scored a best finish of ninth in ADAC F4 this year, was third once again in the second session, in front of the Danish F4 champion Malthe Jakobsen.

Australian F4 champion Luis Leeds was fifth, with Krutten’s time from the morning putting him sixth overall for the day.

Finn William Alatalo, a veteran of two seasons in Italian F4, was fourth and sixth in the two sessions. Just behind him the morning was French F4 runner-up Reshad de Gerus, whose afternoon session ended early.

The top 10 for the day was rounded out by two single-seater novices, with Joao Rosate – champion of the silhouette-based Sprint Race series in Brazil – and Portuguese GT4 racer Mariano Pires edging out SMP F4 champion Pavel Bulantsev.