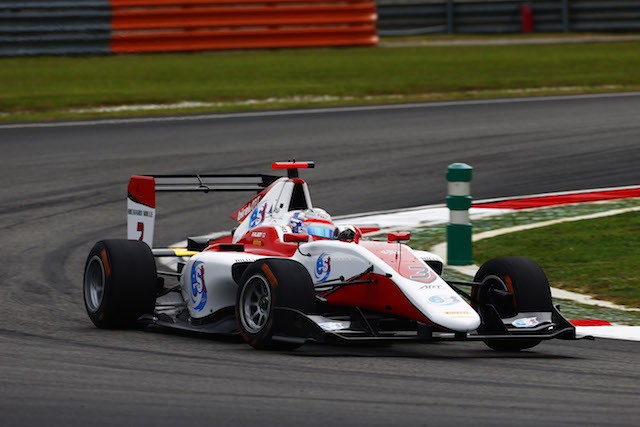 Alexander Albon has won the first ever GP3 race at Sepang by more than five seconds from his?nearest competitor. Albon crucially got the lead at the beginning of the race?by making the better start from second on the grid. Once ahead, he was able to hold onto the lead with relative ease until the end of the race.

Charles Leclerc couldn’t match Albon’s start off the line as the Thai driver?squeezed his title rival into the first corner to take the lead. Nyck de Vries followed the pair out of turn three, but he misjudged his braking point into turn four and ran into the back of both his team mates. Albon got off relatively unharmed to keep the lead, but it was Leclerc who took the biggest impact. De Vries dropped far down the field?but Leclerc was able to continue on, albeit down in fourth?position.

With the incident happening ahead of him, this allowed Jack Aitken to find himself up into second position. Now with the tow on the pit-straight in hand, Aitken was slowly gaining on Albon’s lead. Leclerc then made the move passed Arjun Maini to get back into the podium positions on the inside of turn five.

After a poor qualifying session, championship contender Antonio Fuoco had gotten himself?up into eighth place, but he was now being challenged by Matt Parry as the Italian driver?lost touch with Nirei Fukuzumi ahead of him.

With half of the race completed, the majority of the drivers were running within one second of each other, but few?were close enough to make a move. Tyre wear was starting to become a factor, as a relatively quiet drive by?Steijn Schothorst?in fifth position was now becoming under threat by?Jake Dennis behind him. Dennis made a dive into the penultimate corner on the Campos?driver to take the position, but the Brit locked his tyres up and ran wide out of the corner, allowing Schothorst back ahead. With the pair now squabbling for position, it allowed the likes of Fukuzumi and Fuoco to join in.

Aitken was losing time to Albon in the dying stages of the race, which meant that Leclerc was now within striking range to take back second position from the Brit, with Maini closing in behind as well.

But nothing was going to stop Albon, who took the chequered flag?by more than five seconds. Aitken was able to hold off Leclerc for second position as the Monegasque had to settle for third. Maini took fourth, with a big gap back to the fifth place driver?Schorthorst. Dennis, Fukuzumi, and Fuoco were the next over the line in sixth, seventh and eighth. De Vries managed to make his way back up to ninth at the line, but a five-second penalty for his earlier incident dropped him behind both Parry and Sandy Stuvik.