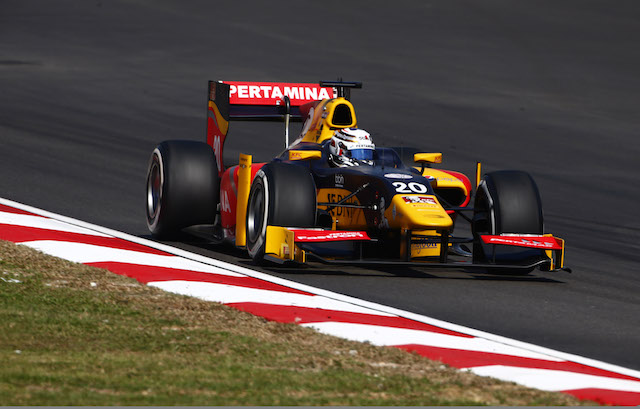 Antonio Giovinazzi has won a chaotic GP2 Feature Race as the series visits Sepang for the first time since 2013. The Italian driver led most of the race before the pit-stops, but had to claw back the win from Sergey Sirotkin, who had used the undercut to get ahead of Giovinazzi until the dying moments?of the race.

When the lights finally went out, Pierre Gasly made a horrible start from pole position and dropped way down?the field as Raffaele Marciello made a perfect start from third on the grid to get himself into first going into the first corner. Marciello then locked up going into turn two and this allowed second place starter Giovinazzi to get ahead and take the lead of the race. Marciello tried to take the position back coming into turn five, but he couldn’t hold onto the car and had to bail out of the move, allowing Sirotkin to overtake him for second place.

Alex Lynn was onto the back of Norman Nato?for fourth position, but the DRS detection point was not functioning down?the main straight. This mean that Lynn and many other drivers were able to get onto the car in front, but not close enough to make the move down the main straight into turn one.

At the start of lap seven, Oliver Rowland and a very slow Gasly made their?pit-stops onto the harder compound tyres. The following lap, Nato made his stop and just got out ahead of the pair of them. Lynn made his stop a lap later, but he came out behind both Nato and Rowland, showing that the undercut was working very well for those who had pitted early.

Marciello pitted a lap later, but a very slow stop where the wheel gun wouldn’t tighten?meant that he came back out onto the track behind Nato, Rowland and Lynn as well. This meant Sirotkin, who pitted the same time as Lynn, was now flying on the new tyres, and this put pressure on Prema to pit Giovinazzi from first place. Despite a near perfect stop for Giovinazzi, the undercut from Sirotkin worked better than expected, putting the Russian driver into the net?lead of the race.

Luca Ghiotto was running first on the track using the opposite tyre strategy. The Italian driver was running a full five seconds ahead of Mitch Evans and Gustav Malja in second and third. But Malja was the first to blink, pitting on lap 16 and coming out just behind Gasly. Meanwhile, Sirotkin was making his way through the hard compound starters, and this allowed Giovinazzi to catch up to?the?Russian driver.

Ghiotto and Evans pitted on lap 19, with Ghiotto coming out in eighth position just ahead of Gasly. Evans on much fresher medium tyres was able to easily dispatch Gasly into the penultimate corer of the track, with Malja following him through a lap later to demote Gasly out of the points.

The battles weren’t over, as Lynn and Rowland battled it out corner after corner for fourth?position. Rowland went wide coming out of turn 14 allowing Lynn through, but Rowland came back at Lynn by picking up the tow down the main straight, almost touching the pit-lane wall to take the position back in turn one. It was all for naught however, as Rowland’s tyres were shot and by the time they made it back to the start line again, he was re-passed by Lynn. Marciello and Lynn then made their way through the British driver a few corners later.

With only two laps left, Giovinazzi was onto the back of Sirotkin, and by using the DRS on the back straight, he was able to set up a drag race down the main straight. Sirotkin held first?into turn one, but Giovinazzi hung out his car into turn two and was able use the driving line out of turn three to re-take the lead.

Once he had first back, Giovinazzi had nothing stopping him from taking his fifth win of the season and the championship lead. Sirotkin settled for second after two rounds off the podium, with Nato taking the final podium position in third. Lynn took fourth position ahead of King, who passed Marciello in the dying moments for fifth place. Ghiotto took seventh, ahead of Evans and Malja in eighth and ninth place, with Sergio Canamasas in the final points paying position.

Rowland and Gasly battled it out over the line with 0.00 seperating them on the timing screens, but neither drivers scored points.