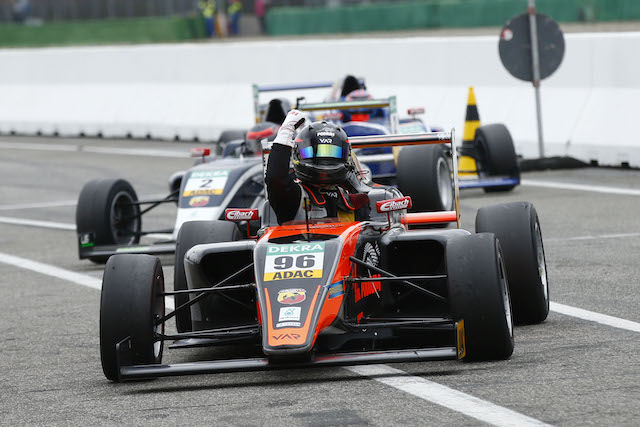 Joey Mawson?secured the ADAC Formula 4 title with two races to go with victory in the opening race of the Hockenheim finale.

The Australian?missed out on pole position to?Mike Ortmann?and fell more than a second behind the Mucke driver as he battled for second with?Juri Vips on the first lap, but was soon able to cut the gap.

He claimed the lead on the inside at the Mercedes Arena after going side-by-side with Ortmann around the outside of the preceding fast right-hander.

Victory was enough to Mawson to put the title beyond doubt with his rival?Mick Schumacher finishing sixth after a tough start to the weekend.

He was one of seven drivers excluded for a fire extinguisher irregularity in qualifying, and had to proceed through the qualifying race which he won from 14th on the grid.

The Prema man progressed from 22nd to fifth in the first main race, but his title hopes already looked over before he ran wide at Turn 1 and was repassed by Thomas Preining.

Vips and?Lirim Zendeli finished ahead of them in third and fourth, each gaining a place when?Kim Luis Schramm?stalled from third on the grid and was fortunate not to be collected by those behind.