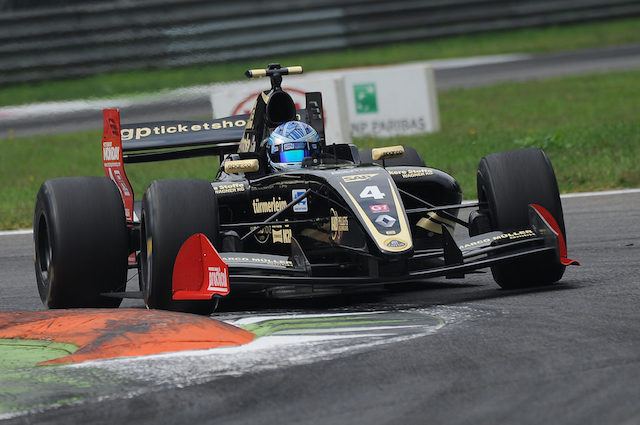 Roy Nissany has taken his third win of the Formula V8 3.5 season by winning the first race of the weekend at Monza.

Although the Israeli driver lost the lead off?the start, he was able to stay calm under pressure to retake the lead and win the race by over ten seconds in front of?his nearest rival.

Nissany was slow away from the grid which allowed Pietro?Fittipaldi to momentarily take the lead of the race as they approached the turn one chicane.?Fittipaldi would then outbreak himself and throw away the lead as the Brazillian had to take to the escape road to make the corner.

This allowed Nissany back ahead as several drivers behind, including Nissany’s team mate Rene Binder, bounced along the kerbing on the inside of the chicane, dropping them back into the pack.

With most of the drivers ahead making a mess of the first chicane,?it allowed?Matthieu Vaxiviere to find himself up into second position from eighth on the grid.

Louis Deletraz would then catch and overtake Vaxiviere into turn one after getting a good tow down the main straight, demoting Vaxiviere into third and into the clutches of?Aurelien Panis.

Behind the top four, Binder got back onto terms with Fittipaldi to overtake the Fortec driver around the outside at the Curva Grande. With Binder now past, Fittipaldi was now being hustled by Yu Kanamaru who managed to use the tow down the main straight to make the pass before the first turn.

With the top four seemingly too far ahead from?the rest of the pack, the action was being squarely focused on the struggling Fortec car of Fittipaldi. The Brazilian was starting to really struggle and was once again overtaken into the first corner, this time by both?Beitske Visser and Egor Orudzhev.

Returning driver Will Buller?in the final points paying position was the next to try and overtake Fittipaldi, but the?Brit was unable to keep up with the Brazilian down the main straights, leaving him with less overtaking opportunities around the speed heavy track.

With about half of the race left to go, the running order remained relatively the same until the end. Fittipaldi desperately tried to stay?in the points but was passed by both Vitor Baptista and Alfonso Celis in a handful of corners as he continued to struggle with his car. The battle for fourth?was starting to heat up between Panis and Binder on the ?penultimate lap, but a spin and subsequent crash out of Ascari by Visser put an end to any racing in the last part of the track, stopping any progress by Binder until the chequered flag was shown.

Nissany would take the win by more than ten?seconds from Deletraz, who himself was nearly eight seconds ahead of Vaxiviere in third. Panis held off Binder to take fourth position, ahead of Kanamaru in sixth. Orudshev was bumped up to seventh after Visser’s spin, with Baptista, Celis, and Buller rounding out the top ten.