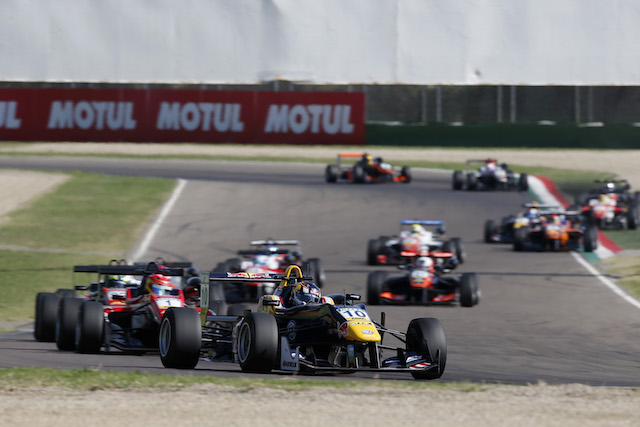 Niko Kari produced a stunning move around the outside of champion-in-waiting?Lance Stroll?to score his maiden?FIA Formula 3 European Championship win in the first?Imola race.

Stroll had grabbed pole position from under the noses of Red Bull Juniors?Sergio Sette Camara and Kari in qualifying, and with Sette Camara suffering from yet more engine-change?grid?penalties, it was Kari that took the fight to the Canadian in the race.

Prema’s Stroll made a good start, but Kari quickly closed up and was all over the Canadian into Tamburello at the start of lap three.

Stroll responded well to that initial pressure and to a first safety car restart, but on a?second restart with eight minutes to go, Kari swept around his outside on the entry to?Tamburello to snatch the lead.

Kari couldn’t pull away, but the 16-year-old Finn wasn’t threatened either on his way to the chequered flag.

Second still represented a big step for Stroll towards wrapping up the title this weekend, with rival?Maximilian Gunther having had a shocking weekend so far.

Competing?at Imola for the first time, the German crashed early in practice on Friday and could qualified down in 17th, ahead only of the two returning T-Sport cars. He finished the race in 12th, swinging Stroll’s?margin?above the 75-point?mark he has to beat to end the weekend as champion.

Joel Eriksson, the leading rookie this season, did all he could to stop Motopark team-mate Kari hogging the limelight with an attacking drive from sixth to the podium, passing?Anthoine Hubert and then?George Russell early on and taking?Nick Cassidy?just before the second safety car.

The Swede finished on Stroll’s tail and within a second of the winner.

Cassidy kept Russell at bay to finish fourth on the road, but was one of a seven?that were later handed 20-second penalties for abuse of?track?limits.

That dropped him to 10th and promoted Russell not only to fourth in the race but third in the standings ahead of the Kiwi.

Hubert finished up with fifth, but had briefly dropped as low as eighth when he was passed by?David Beckmann and Sette Camara in quick succession.

After dropping outside of the top 10,?Guan Yu Zhou ended up with sixth after passing his old Italian F4 rival?Ralf Aron, with Ben Barnicoat managing a decent recovery from another poor qualifying to take eighth.

With Mikkel Jensen another to be penalised,?Harrison Newey ended up ninth after surviving slight contact from behind by Van Amersfoort team-mate?Callum Ilott.

Ilott had earlier battled with Sette Camara when he made a first trip through the Tamburello gravel trap, which he would visit again when he got too close to Newey in the closing stages. To rub it in he was penalised for track limits, leaving him 15th and last.

Eriksson and Stroll claimed pole for the Sunday races in second qualifying, where Sette Camara was quickest but will again be unable to take up his rightful place.