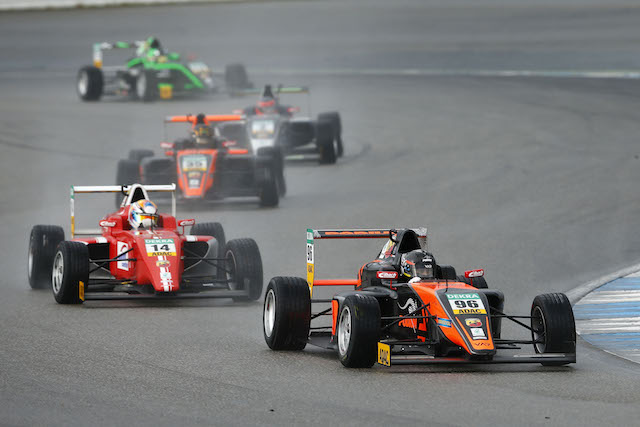 New ADAC Formula 4 champion Joey Mawson followed up clinching?his?title with another win in race two at Hockenheim, which was interrupted by a rain shower.

Starting on pole, the Australian was able to build a huge lead on the first lap, partly thanks to Kim-Luis Schramm and Mike Ortmann colliding behind him over second place coming onto the Parabolika.

Both cars were sent sideways across the track, but were somehow completely missed by the pursuing pack. The red flags were soon out on lap two though to allow a change to wet tyres with rain increasingly falling.

The clock continued to run down during the stoppage and only eight minutes remained at the restart.

On the second racing lap,?Juan Correa,?Fabio Scherer and?Andreas Estner?came together at Turn 2 to bring the safety car back out, with no time left for a restart.

Mawson took the win ahead of?Thomas Preining and?Kami Laliberte, who made good progress?from fifth and eighth on the very first lap.

Mick Schumacher had to start 35th and lost his front wing carving through half of the field on the first lap, but the red flag allowed him to get it replaced and he finished up eighth.