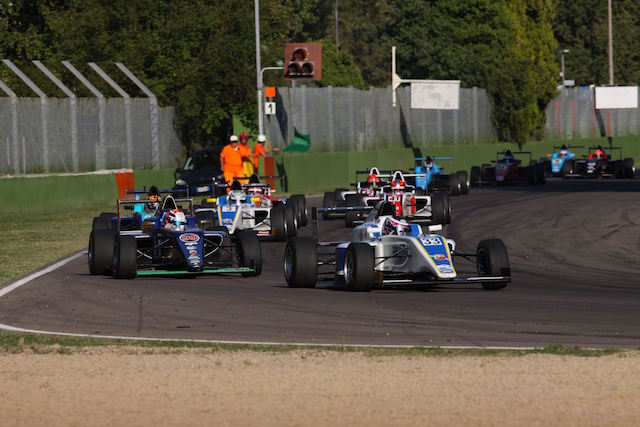 Sato made a better start from third on the grid than front-row men?Yan Leon Shlom and?Leonard Hoogenboom to take the lead down the inside at Tamburello for the first time.

After an early safety car period, the Japanese driver briefly lost the lead to Shlom, only to reclaim it before the end of the lap.

Petrov went?on a charge from fifth on the grid and got very close to Sato over the final two laps of the race, but the Vincenzo Sospiri Racing driver held on for his maiden single-seater win.

Siebert started eighth on the grid and maintained his position off the start, later gaining a place when Correa and?Raul Guzman collided at the restart to end the Mexican’s race.

He was passed by Colombo going on to the final lap and in trying to fight back at Tamburello the Argentine spun and fell down the order, compounded by a penalty for abusing track limits that left him 21st.

The good news for him was that Schumacher completed a point-less weekend having had to start from the back after being hit into the gravel at the start of race two.

The Prema driver’s recovery attempts were hindered by another off-track moment at the same place on the first lap, before making his way through to 13th.

It means Siebert leads by 25?points ahead of the final round at Monza at the end of October, but?it’s not the 40-point margin?he would have had?the third place he scored in race one not been taken away by?a penalty for a jump start, just like?Schumacher received?during the race.