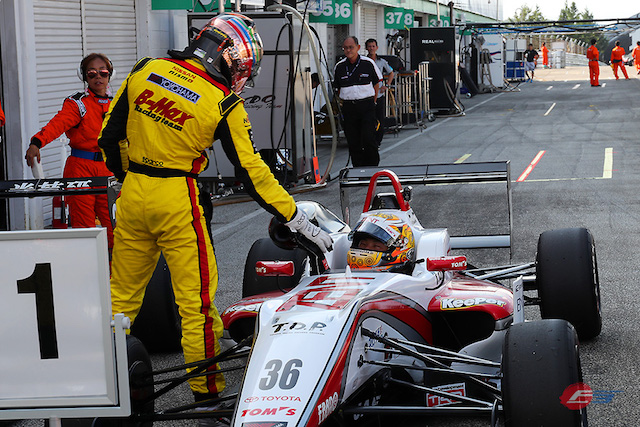 Having finished runner-up to?Nobuharu Matsushita and?Nick Cassidy in the past two seasons, TOM’s Toyota driver Yamashita led the standings through the first four rounds after making a winning start at Suzuka.

Competing in Japan for the first season in the Nissan-supported B-Max squad powered by Volkswagen engines for the first time, Mardenborough grabbed the lead with a win and a second at Fuji in July on an off weekend for Yamashita, and then won twice at Motegi to move 19 points clear.

A difficult penultimate round at Okayama two weeks ago reduced the Briton’s margin to eight points going into the triple-header Sugo finale, where?he lost out to Yamashita in qualifying.

Yamashita converted pole into a lights-to-flag win in both of the first two races to?move a point ahead of?Mardenborough going into the decider. In race one, Mardenborough sat third behind team-mate?Katsumasa Chiyo – returning from injury – before the Nissan GT driver crashed out, while in a damp race two he grabbed second from Yamashita’s team-mate?Sho Tsuboi off the line.

In the finale, Yamashita fended?off Mardenborough at the start and the opening laps prior to a safety car, after which Yamashita got the better restart and was able to start pulling away.

Completing the podium in all three?races and the standings was Tsuboi, the reigning Japanese Formula 4 champion having taken more podiums than any other driver with 16 out of 18 races – three more than Mardenborough and five more than Yamashita.

The wins were shared between Yamashita and four Nissan GT?drivers with past F3 experience, with Mardenborough and Chiyo joined as winners by Mitsunori Takaboshi and Daiki Sasaki?picking up a double win each from limited appearances with B-Max.

Without that experience, it was a harder season for Honda after success with European-bound drivers Matsushita and?Nirei Fukuzumi in the past two years.

Tadasuke Makino – Tsuboi’s 2015 F4 rival – scored four podiums, while?Sena Sakaguchi also got one in his first full season in cars, in which he’s also contesting F4 where he has a chance of the title in November’s Motegi finale.