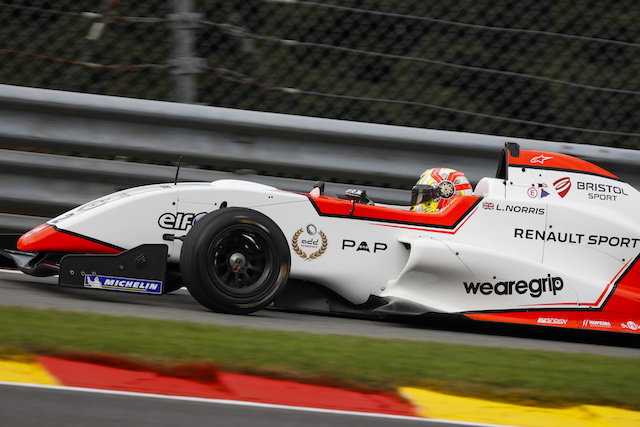 Lando Norris has claimed the Eurocup Formula Renault title with a round to spare, finishing second to Dorian Boccolacci in race two at Spa as main?rival?Max Defourny failed?to capitalise on pole position.

Defourny was five places ahead of Norris on the grid, putting him in a good position to keep the title fight alive, but lost the lead to race one?winner Hugo de Sadeleer into Les Combes for the first time and suffered front wing?damage as he got wide over the kerbs in his attempts to keep the place.

The Belgian quickly fell down the order and was then hit by?Gabriel Aubry in a four-wide moment into Les Combes for the second time. He pitted and rejoined but?couldn’t progress towards the points.

With Defourny not scoring, Norris just needed to finish reasonably close?behind Boccolacci (who was 66 points adrift?coming into the race) which he managed to achieve despite the Frenchman’s?drive towards the front.

De Sadeleer benefitted from the ailing Defourny to open up a good lead, but he was soon caught by Boccolacci, who started fourth.

With four minutes to go,?Boccolacci looked to have the move done under braking at the Bus Stop but de Sadeleer impressively held?on around the outside.

When de Sadeleer had a?look at Boccolacci on the penultimate lap, Norris capitalised to take second.

The 16-year-old Briton becomes the first Formula Renault rookie to win the Eurocup title since Robin Frijns in 2011.

As in race one, Fenestraz was stopped from making it a Tech 1 1-2-3 by Josef Kaufmann Racing driver Norris.

Harrison Scott, who also came into the race with a slim mathematical chance of the title, finished in a lonely fifth, while?Nikita Troitskiy claimed sixth.?Julien Falchero headed a fight for seventh in front of?Henrique Chaves,?Will Palmer?(who was up to fourth early on in front of Fenestraz before spinning at the Bus Stop) and?Ferdinand Habsburg.

Jehan Daruvala started second and after losing out to de Sadeleer regained the place from Defourny at the end of the first lap, but he quickly dropped back, was penalised for going off-track in his move on the ailing Defourny and ended his race after a collision with?James Allen.